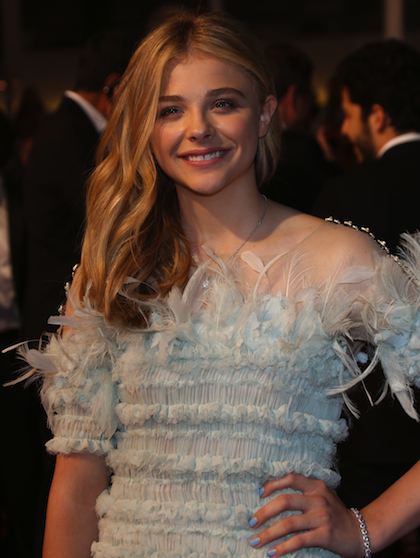 Who is the next young movie starlet that we should all be looking out for? Chloë Grace Moretz. That’s who.

This 17-year-old started acting at the age of seven and has been in plenty of televisions shows and blockbuster films alike. Before she turned fourteen, she already had roles in movies like 500 Days of Summer, Diary of a Wimpy Kid, The Amityville Horror, Big Momma’s House 2, and, one of my personal favorites, Kick-Ass. Her portrayal of Hit-Girl in Kick-Ass made her one of my favorite characters showing that not only females can kick butt, but so can female kids! Maybe I’m just a little kid at heart...

She built a pretty amazing resume before she turned fifteen, and she is only just getting started. Last year, she starred in the revival of Stephen King’s iconic story, Carrie. More recently, she starred in two films that made an appearance at two of this year’s most distinguished film festivals, Sundance and Cannes. At Sundance, Lynn Shelton’s film, Laggies, also starring Keira Knightley, was screened, while at Cannes, her other film Clouds of Sils Maria, co-starring Juliette Binoche and Kristen Stewart, was shown.

Chloë has a few other projects in pre-production and post-production, including the highly-anticipated If I Stay, based on the novel written by Gayle Forman.

This trailer gave me chills. I cannot wait until it comes out in August!

Chloë Grace Moretz may be playing teenagers in her movies, but she has the talent and experience of a great actress. Her talents are still developing, and she has a wonderful career ahead of her.

Can you believe she was Joseph Gordon-Levitt’s little sister in 500 Days of Summer? It seems like only yesterday she was the FIRST EVER GUEST at the YH Studio to talk about Kick-Ass with Christopher Mintz-Plasse and then, later, returned with Kodi Smit-McPhee to discuss Let Me In:

Remember the name Chloë Grace Moretz because it may very well be etched on an Academy Award someday!