Backstreet Boys Are Back Again in New Documentary! 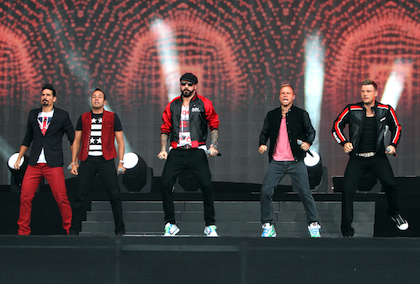 #TBT One of my favorite boy bands is back, and this video is just too appropriate not to watch!

Everything that '90s teen and tween girls have wanted concerning the Backstreet Boys!

Backstreet Boys: Show ‘Em What You’re Made Of was originally supposed to document the band’s reunion for their 2013 album. Later, the video turned into a trip down Memory Lane and a Behind the Music: Backstreet Boys edition, if you will.

The timing of this documentary is perfect. In all of the hype and peak of boy band stardom -- with artists like One Direction, 5SOS, and countless others -- a time machine back to the '90s will help everyone remember where the “boy band” was transformed.

FOREVER. This song is in my heart FOR-E-V-E-R.

And since we’re taking this nostalgia trip...

Well, this was just my tween anthem. Sometimes it still is. [tear]

Back to the documentary -- the members of the band talk about how they started and the music scene at the time, essentially pioneering the re-introduction of boy band music into the mainstream. They also delve into the transition from boy band stardom to being “a full-grown man in a boy band”. The documentary also documents their comeback and reunion, which is what I am very excited to see!

Check out the song that inspired the title of their documentary film:

We are so glad BSB is back, and I think we can all admit that a world without the Backstreet Boys would be…

But we definitely won’t end on a sad song. Let’s leave it on a happy note, because “I want it that way” (heheh):

For anything and everything Backstreet Boys, including their 2015 tour, check out their website!

And don’t forget, the documentary will be released on January 30 in North America!