Back In (Rebecca) Black: "Saturday" Hits The Internet! 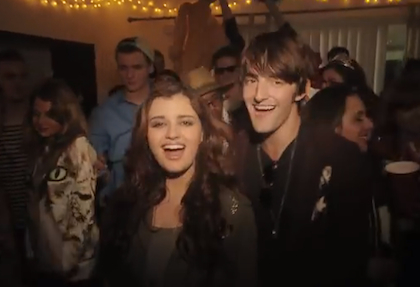 That’s right, folks, Black is BACK! Rebecca Black, that is, with the long-awaited sequel to her 2011 viral sensation, “Friday” – “Saturday”, natch!

Ms. Black steadily works her way through the calendar with yet another weekday-inspired ode, and this one… well, it’s actually pretty decent!

As I’m sure you all remember (honestly, how could you forget?), Rebecca burst onto the zeitgeist for all the wrong reasons with her baffling and slightly pitchy pop tune “Friday”, which quickly earned so-bad-its-good status in the online community, and about a bajillion YouTube hits to boot. She got a lot of flack, but she also had her supporters, including Simon Cowell and even me, who defended her business savvy at the time. Rebecca herself also took the attention in her stride, maintaining a good sense of humor about it. Mainly because, as it turned out, she was a much better singer than “Friday” led on!

And now that brings us to the day after “Friday”, “Saturday”. As far as breezy pop songs go, it’s pretty effective. Not as catchy as “Friday”, but that is probably for the better – Rebecca seems to acknowledge this herself at the very beginning with the line “Trying to get Friday out of my head”… We’re with ya on that one, gurlfriend!

Rebecca also gets a little help from fellow YouTube star Dave Days, who takes a verse and appears with her in the party-themed video. There’s beaches, sparklers, twerking, and silly string – what more can you ask for? No wonder she doesn’t “want Saturday to end”!

But, end it will, eventually, and in another two years, we will no doubt be hearing all about Rebecca’s exploits on Sunday!

Check out the video below to get so excited about “Saturday” (one question though: what the hell does “Where’s the peanut butter?” mean???):