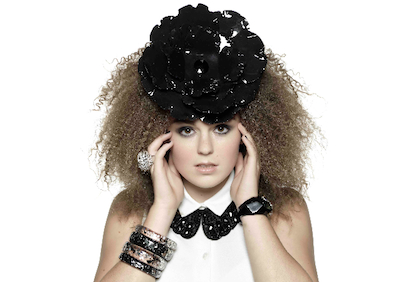 Soulful singer and Scotland native Tallia Storm has recently gotten the chance to make her dreams come true -- she has been signed a long-term recording agreement with Virgin Records! On top of that, she has also been named the new Brand Ambassador for Paul Frank. Pretty impressive feat for anyone made all the more remarkable when you realize she’s only 15 years old!

If you think 15 is super young, wait until you read this. She began singing at the tender age of 11, and two years later, she met Elton John’s husband, David Furnish. She gave him her demo CD, along with a letter, and Furnish gave it to Elton. The legend called himself Tallia the next evening and invited her to open his sold-out concert at Scotland’s Falkirk Football Stadium! Her R&B groove defied her petite teen frame, and she was dubbed “Tiny Chancer” on front-page news in the U.K. From there, she started performing all over the world, from London and Madrid, all the way to New York, where she was invited by the legendary Nile Rodgers to perform at TEDxTeen.

Back in August, BBC Radio 1Xtra introduced her as “Artist of the Week”, with her track “California”. How cool is that? That track is AH-mazing, and her deep bluesy voice gives me chills. I constantly have to remind myself that she’s eight years younger than me! Take a listen for yourself below:

When Tallia isn’t working on her music, she’s maintaining her studies, raising money for her favorite charities like Genetic Disorders UK, and writing a blog for Huffington Post Teen in New York.

Clearly, her big hair matches her big talent. If you want to keep up with her quirky cool style and music, check out her Official Website and follow her on Twitter!

Get ready for it guys, her #Storm is a-brewin’!