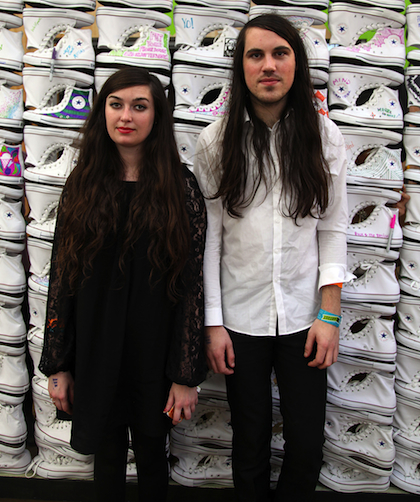 Dynamic duos have done extremely well in indie music. Cults has been a great example of this, essentially creating a cult-like following (insert rimshot). Maybe it’s the trace-like tempo or the soothing vocals. Here’s one of their songs, in case you aren’t familiar with their music.

The duo came together in New York in 2010 when they were both attending school. Brian Oblivion, who plays guitar, percussion, and also does vocals, was at NYU for film, while vocalist Madeline Follin was at The New School. You might be able to detect some of the artistic music video concepts that Brian picked up while at NYU, especially in their “Abducted” music video:

Madeline’s voice, along with the upbeat, catchy tempos, make a great combination. They released an EP for their song “Go Outside”, the music video of which stars Dave Franco and Emma Roberts.

Cults is most definitely on the rise. They have played many of the big music festivals, like Coachella, and are currently touring around the United States. Their song, “So Far”, even made it on Bullett Magazine’s Indisputable, Definitive Best 53 Songs of 2013 list. They released their first album in 2011, and they just released their second album, Static, last year. The duo is developing their sound and it shows in their second album. Here’s “Shine A Light” from Static:

If you go to one of their shows, take a photo or video and put it up on Instagram for a chance to win a prize pack from the band! Make sure to use the #StaticTour hashtag. You can find your pictures and videos as well as other people’s photos on their website.

Let’s close with one of my favorite songs from their first album.