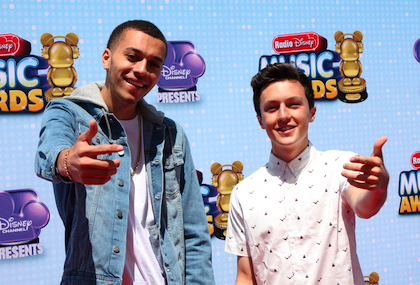 And that is exactly what it is. Here at YH, our hearts were stolen by Kalin & Myles. Not quite sure what I’m talking about? Don’t worry. I’m sure you’ve heard their song on the radio.

This duo hails from the Bay Area (or should I say BAE Area? Yes, I think I will...). Myles always had an interest in music, whether it was making beats or recording raps. One day in 2011, Myles heard a guy named Kalin singing a little Sean Kingston. Well, I’ll just let you listen to Myles tell the story.

So that light bulb went on, and Kalin & Myles was born. They recorded a song, made a video, put it up on YouTube, and the KAM FAM did the rest!

Check out the song where it all started!

They got a great response to the video and decided that they needed to make more music! They continued to create more original songs as well as remixing covers. Check out some of my favorite KAM covers below...

Whoa. Boys. I’m glad you changed up the lyrics. Not that I don’t love a little Chris Breezy, but… well, how 'bout you, boys, call me when you turn 23?

Thanks to their very supportive fans and a dedicated street team, they were able to tour and perform and eventually become the Kalin & Myles we know and love today. KAM is blowing up; they will be starting their 2015 Dedication Tour and tickets are on sale now!

The tour will also include Crazy for Christmas dates!

So, if you want to see Kalin and Myles in concert, it’s not too late! Get your tickets here!

And I’ll go ahead and just end this article with this gem:

Don’t forget Kalin and Myles's newest EP is out NOW! For anything and everything KAM, check out their website!