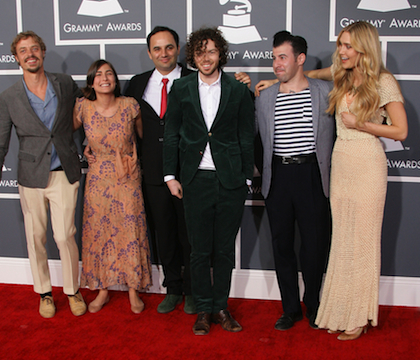 And the award for most interesting band name goes to….

This 11-member band -- yes, I said 11-member band -- plays a soulful, folkie sound that appeals to many listeners. The band first formed when Alex Ebert met Jade Castrinos, both singers, in Los Angeles in 2007. The duo joined an art and music collective where they wrote music and songs together. In 2009, the twosome toured the country along with other musicians and created Edward Sharpe & the Magnetic Zeros.

Don’t be fooled like me -- "Edward Sharpe" is not a member of the band; in fact, Edward Sharpe is actually a character from a book written by Ebert. It has also been said to be Alex Ebert’s alter ego.

Check out one of my favorite songs, which always has me practicing how to whistle:

The band is very versatile and talented, with everyone playing various instruments and lending their vocals to each song. Aside from Alex and Jade, the band also includes Stewart Cole, Josh Collazo, Orpheo McCord, Nora Kirkpatrick, Christian Letts, Seth Ford-Young, Mark Noseworthy, Christopher Richard, and as of 2013, Mitchell Yoshida. (Whew!) Between them, they have mastered the trumpet, percussion, keyboards, ukulele, drums, saxophone, marimba, accordion, guitar, bass, piano, and the clavinet.

Here’s a song from their first album, Up From Below:

The beginning kind of sounds like typical movie soundtrack song, but it picks up and you can really hear the intricate sounds that the whole band brings together.

With great music comes dancing! They definitely get their groove on when they play their concerts. They’ve played major festivals like Coachella, Bonnaroo, and Lollapalooza, to name a few. Check out their music video for “Man on Fire” where they showcase real people and group’s various dances including step, cheerleading, tap, and even Double Dutch:

“Man on Fire” was released on their second album, Here, which was listed on Rolling Stone’s Best Albums of 2012.