"American Horror Story: Apocalypse" - The Ups, The Downs, & Everything In Between! 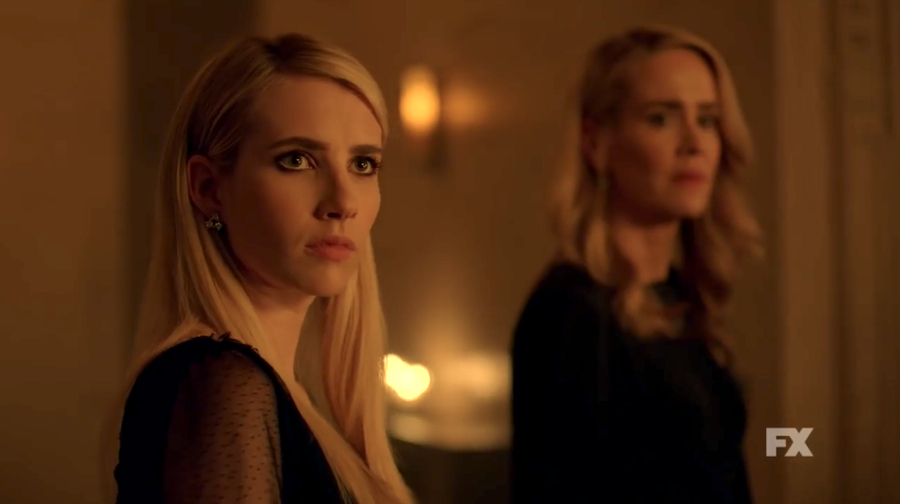 Ryan Murphy is undoubtedly a television writing mastermind. He is behind some of TV’s greatest hits, including "Glee", "American Crime Story", and, of course, "American Horror Story". He is basically the Shonda Rhimes of plot twists. Although it is undeniable Murphy is still a creative genius, sometimes it feels like he has too many ideas and wants to execute them all at once. This season of "AHS" particularly, "Apocalypse" often felt like it was all over the place. It was basically a "Coven" special with random cameos from "Murder House" and "Hotel" thrown in. While seeing previous seasons characters was exciting, it felt like they were relying too hard on keeping past season characters alive rather than developing this season’s storyline. Furthermore, it felt like Murphy’s love for his own characters often got in the way of telling the story. His need to justify every character's bad action had us even feeling compassion for Satan’s actual spawn! That being said, this season was not all bad. Like I said, it even managed to make us feel compassion for the Antichrist! There is something to be said about that.

Here are a few hits and misses from this season, IMHO:

I have to admit, seeing all the previous characters come back was super exciting. I especially enjoyed Jessica Lange’s comeback. She is basically perfection. Also, seeing Frances Conroy’s Moira finally rest in peace with her mother was heartwarming. There are some things I didn’t particularly love (like the fact that Tate, an actual school shooter, got justification in the end left a bad taste in my mouth), but overall, it was pretty awesome.

It's not that I didn't like the concept, I just think we spent way too many episodes on it, to the point where we strayed too far from the main story. I would have been okay with just the information we got in the Murder House episode. Michael’s hot and cold behaviour towards his role in the Apocalypse became tedious after a while, and while seeing Evan Peters and Billie Eichner’s nerdy tech duo was fun, it just felt unnecessary and made the fact that the world was ending a lot less impactful.

If one thing can be said about Ryan Murphy, it is that he is an avid proponent of girl power. Not only does he have great female characters, but he even based a whole season ("Cult") on the inherent power of women and women leaders (yasss). The witches truly save the day -- both literally and figuratively.

MISS: All the flashbacks

It made it really hard to follow the timeline of the show. At some point, you just let yourself go with flow, but there are certain flashbacks that seem a little too forced. For instance, having Mallory (Billie Lourd) practice going back in time by trying to save Princess Anastasia (Ryan Murphy LOVES incorporating history) was a bit out-of-nowhere and a little too distracting, considering we are trying to stop the world from being nuked into oblivion, thankyouverymuch.

No surprise here, everyone was awesome. I could spend days praising each and every actor (Sarah Paulson is probably dehydrated from her constant crying in "AHS", and there is truly no character Evan Peters can’t do), so I will instead focus on "AHS" newcomer Cody Fern. Although we had already seen him in Murphy's Emmy-winning "The Assassination of Gianni Versace", Fern’s performance as Michael Langdon was completely stunning. So much so that you couldn’t help but feel protective and even root a little bit for the son of Satan. Even after the show’s finale, I can’t help but think Michael Langdon deserved better, since Fern’s conflicted performance made me feel like the true battle between Good and Evil happened inside Michael the whole time.

I have so many mixed feelings about this season's finale. On one hand, it was a nice wrap-up that tied most loose ends together in a classic Ryan Murphy way. When Mallory goes back in time in order to kill Michael, everything seems like all's well that ends well -- until we find out that you cannot really escape prophecies. Especially when The Devil is involved. As Mallory wonders how her actions have affected history’s course, we finally got to see Timothy (Kyle Allen) and Emily (Ash Santos) reunite after they were killed way back in Episode 3. However, in the Epilogue, it is revealed that, after rekindling their romance, they are now parents to a son who is on his way to becoming the new Antichrist, proving that the battle between Good and Evil is never ending.

What I found annoying about the ending is how truly anticlimactic it was. Sure, there was a lot at stake, but I was expecting a full-on battle between Michael and the witches à la Dumbledore & Voldemort at the end of Harry Potter & The Order of The Phoenix. What is more, it seems that the way Michael died (he gets run over by Mallory outside of his house) was too simple. However, Jessica Lange’s “go to Hell” after Michael requests to be taken “home” so they can be together definitely makes up for it.

Yes, I know, Madison Montgomery (Emma Roberts) was a bitch. That has been established. But I would just like to make the point that, regardless of how she behaved in the past, she was one of the most important characters in this season. So when Mallory comes back from saving the world and informs us that Madison is still in her personal hell and that she was going to take her sweet time to go get her instead of bringing her back as soon as possible, I was appalled. I mean, let’s look at the facts:

- Who came back to revive the dead witches in the hideout with Cordelia and Myrtle? Madison.

- Who went to Murder House to find out more about Michael’s past? Madison.

- Who made sure Coco (Leslie Grossman) and Mallory were together at the right place at the right time before the nuke? Madison.

- Who stayed behind shooting the ANTICHRIST to death multiple times while Cordelia and Myrtle took Mallory to safety and then had her head imploded for it? MADI-FREAKING-SON.

I rest my case.