Alfred Hitchcock and the Making of the Perfect Cameo! 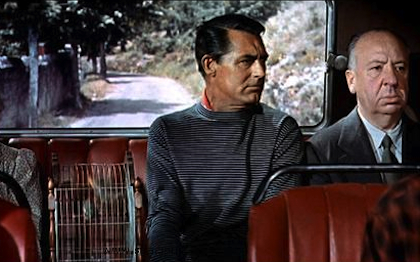 Earlier this summer, in an interview at Comic-Con, we dubbed Stan Lee the King of Cameos. No disrespect to the marvel of Marvel, but we have to give credit where credit is due.

No one did the cameo quite like Alfred Hitchcock. Not only did he make an appearance in just about every single one of his films, starting with 1927’s The Lodger, but he approached it with the same meticulous planning as with the rest of the movie. Not long after he made it big in America, his cameos became as much of an institution as the movie itself, with audiences playing the “Spot Hitchcock” game the moment the first frame came on screen. Because of this, Hitchcock made it a point to appear in his cameo early on in the movie, so that audiences wouldn’t be distracted from the story looking for his signature visage.

Most of the time, his cameo was nothing more than a walk-on, passing through the camera frame as a background player. But some of his more memorable/creative appearances include: a man playing cards with an elderly couple on a train (Shadow of a Doubt); appearing in a Before-and-After diet ad in a newspaper (Lifeboat); and winding a clock in the musician’s apartment in Rear Window.

In honor of the release of Sacha Gervasi's film Hitchcock today, here is a video featuring every one of the director’s fabulous cameos! Enjoy!

Fun Fact: As a tribute the the director, the filmmakers of Psycho II (which came out in 1983, three years after his death) decided to keep the tradition alive by working in yet another cameo -- early on in the film, the outline of Hitchcock's famous silhouette can be seen as a shadow against Mother Bates's wardrobe. Clever!