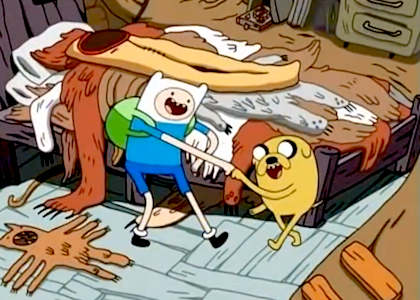 Oh my bacon pancakes! There’s some exciting news coming from the Land of Ooo. Warner Bros. and Cartoon Network have announced that Jake and Finn are about to go on their next great adventure -- the two studios have come together to make an “Adventure Time” movie!

The Lego Movie producers Chris McKay and Roy Lee will be behind the film, so you know it'll be in good hands. The Lego Movie, similar to “Adventure Time,” was a hit among adults and kids. In fact, the film was such a hit that McKay and Lee have announced that the film is getting a spin-off -- One of the unsung heroes of The Lego Movie, Batman, is getting his own film. Lego Batman is currently in production.

There isn’t too much information on the “Adventure Time” film (yet), but if you are unfamiliar with the show, you should immediately stop everything you are doing and watch it. Here is a brief synopsis: Finn the human and his best friend Jake the dog go on a series of adventures through the magical Land of Ooo. The two have a unique variety of friends, including: Princess Bubblegum, who is a scientist; Lumpy Space Princess, a perpetually grumpy space lump; and BMO, their adorable video game friend. The show is full of oddball quips, including a few of my favorites:

“You’re beautiful on the inside... Like your brain and stuff.”

The film is set to be an animated feature, so hopefully this means that it will be traditional 2D animation and not CGI.

Are you excited for the “Adventure Time” film?

Check out the trippy opening sequence below!