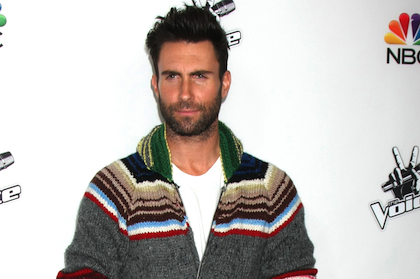 Adam Levine really CAN do it all! He is so talented *sigh*…

NBC’s "The Voice" executive producer Audrey Morrissey and Levine are teaming up with Grammy-Award winning songwriter Dave Stewart on a pilot called "Songland"!

GET EXCITED GUYS, it’s a completely different type of music competition show. How, you may ask? Well, instead of people competing to see who’s the best at covering an already established song, the contestants will get to present their OWN original compositions to the music industry’s biggest artists and producers! And there’s one major goal: to have the next global smash.

This show will give contestants a chance to showcase their creative side, which will be super cool considering that’s what they’d have to do everyday anyway, if chosen by America to be the next big star. Anyone can cover a song -- but writing original material and presenting your heart and soul to a new audience can be scary! And tough. It’s all about connecting with an audience through lyrics and melody. Plus, most music fans appreciate an artist’s personal journey that reflect in his/her lyrics. Just think Taylor Swift. A lot of her fans relate to her because of her lyrics, not just her singing ability.

Another awesome thing about this show is that, while artists only make money on the songs they record, songwriters can generate millions of dollars over the course of their lifetime -- and the show will give aspiring composers that opportunity!

"Songland" is still in development but it’s being produced by Live Animals in association with Dave Stewart Entertainment and Levine’s 222 Production.

What do you guys think?! Will you watch the show? Or better yet, will you compete??