ABC's "How To Get Away With Murder" Is TV's Shrewdest New Crime Drama! 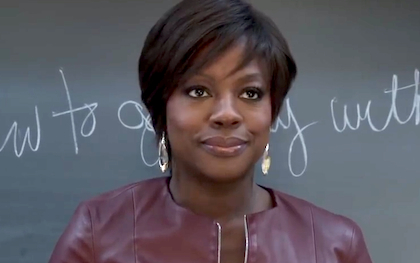 The new ABC series "How To Get Away With Murder" broke DVR records for its pilot premiere last week. They gained over 6 million views in the DVR-playback numbers alone. I watched the pilot, and I can attest that this show is AMAZING.

The show has already opened a huge web of plotlines that has everyone guessing as to what’s even going on. The storyline is intricate, well-developed, and well-thought through. Here’s a peek at the first episode in case you missed it:

The series follows the classroom of Professor Annalise Keating (Viola Davis), a very well-renowned defense attorney, who teaches Criminal Law 100, or what she calls “How to Get Away with Murder”. She announces that she will be hiring four of her students to work at her firm depending upon their performance in her class. She provides them with case studies to discuss, but they are actually current cases she has taken on at her firm.

Viola gives us a wonderful portrayal of a very complicated, manipulative, and genius woman. She is joined by a young and talented group of actors.

The show reveals Wes Gibbons (Alfred Enoch), Connor Walsh (Jack Falahee), Laurel Castillo (Karla Souza), and Michaela Pratt (Aja Naomi King) as the main student characters of the series due to their entanglement in a murder. This future timeline is revealed simultaneously with what happened 18 months prior to the night of the murder. In this previous timeline, we are given glimpses in the cases of Prof. Keating’s firm and how she narrows down her students to hire. We are also shown subplots that are waiting to erupt in later episodes, including one involving Prof. Keating’s affair with a detective and the news coverage of a missing female student. Later, we find out that the body they burned to cover up their involvement was, in fact, Prof. Keating’s husband and not the missing girl.

There are also mini-subplots brewing behind the characters, like Connor’s sexuality and the scandals involving Prof. Keating’s two associates. And what’s with the random scenes with Wes’s apartment neighbor? Matt McGorry, who plays Asher Millstone, also presents competition to the other students vying for the job with Prof. Keating’s firm.

Check out our interview with Matt when he stopped by the YH Studio!

Here’s a sneak peak for what’s to come this season.

I legitimately cannot wait to see how this story unfolds. The only downside is that I have to wait every week for a new episode to air as opposed to my usual binge watching of Netflix. Luckily, I only have to wait until TONIGHT to see Episode 2! So far, "How To Get Away With Murder" is on the top of my list of shows to watch this fall.

Don’t forget to catch How To Get Away With Murder on Thursdays at 10pm on ABC!