A Second Sequel to 'The Ring' Will Have Terrfiying Twist -- 3D! 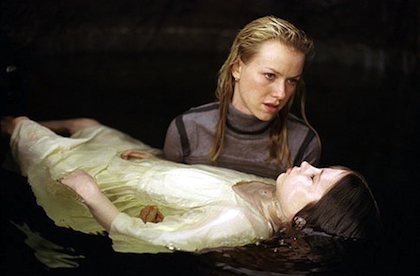 When I was 14, I went with my good friend Keri to see The Ring, based on the Japanese film of the same name. Normally, I end up laughing during horror films (I was nearly kicked out of Signs for misbehaving), but The Ring left me feeling legitimately horrified. For weeks, I became certain that Samara (Daveigh Chase), the creepy monster who is awakened by a video tape, was going to pop out of my TV and crawl her way towards me as I slept. The film was so frightening that I have never watched it a second time, nor its sequel, The Ring 2.

Samara is back to give a new generation nightmares in The Ring 3D. Paramount recently announced that Before the Fall director F. Javier Gutierrez will direct the third entry in the film series, and that this time, Samara will creep towards audiences in glorious 3D! Strangely enough, Samara will still attack her unsuspecting victims via videotape (I guess she hasn’t yet learned about Netflix). Personally, I’m not sure who still watches movies via videotape, or who even still owns a VCR, but the high school I previously taught at only had VHS players, so perhaps Samara will be unleashed on a school. Stars Naomi Watts and Chase are set to reprise their roles for the latest film in the franchise.

It’s fairly surprising that it has taken Paramount this long to release another sequel to The Ring, as there have been multiple sequels to the Japanese franchise. If you have yet to see the first The Ring and watch the new one, be warned -- you may be haunted by Samara’s long, treacherous locks at night.

Are you excited to see The Ring 3D?