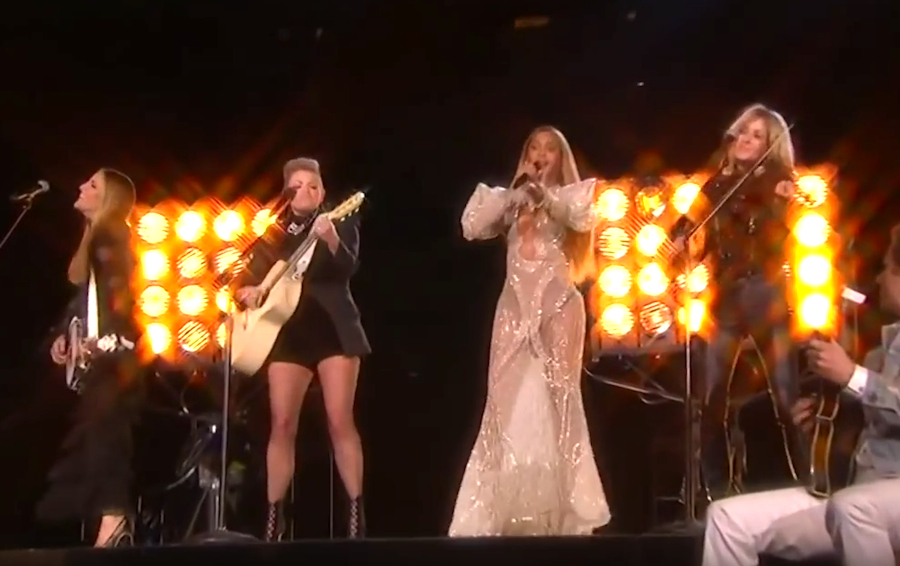 There’s something appealing about two unique, contrasting artists coming together and creating a blended sound; and when the combination actually works, it’s pure magic. There’s always a looming curiosity that sparks the initial interest in the combining of talents, but this list of duets fulfilled, and even exceeded, our musical expectations!

1. "Anything You Can Do" -- Melissa McCarthy and Barbra Streisand

We didn’t even know Melissa McCarthy could sing, but she proved her vocal range in the hilarious rendition of the song “Anything You Can Do” from the Broadway musical Annie Get Your Gun. The best part of the song is their playful banter throughout the track.

2. "The Only Promise That Remains" -- Justin Timberlake and Reba McEntire

Justin Timberlake wrote "The Only Promise That Remains" for Reba McEntire’s 2007 Duets album. Although he doesn’t sing much on the track, the song features a beautifully subtle folk sound and emotional lyrics.

Coming together for an episode of "CMT Crossroads" (a show that pairs unlikely artists together), this contrasting duo surprised the majority of audiences when their opposing styles matched so seamlessly. The duo gave an especially soulful rendition of Morris’s song "Once" for the 2017 Grammy Awards.

4. "Go Ahead and Break My Heart" -- Blake Shelton and Gwen Stefani

This might not be surprising considering the two are dating IRL, but considering their genres and musical styles are exceedingly different, a collaboration seemed far-fetched. However, this song is catchy. Their unique voices have trouble meshing at times, but the dissonance is actually quite interesting.

"Daddy Lessons" is a track off Beyoncé’s latest album, Lemonade, which features a country twang, referencing back to her childhood growing up in Texas. The Dixie Chicks joined Beyoncé in singing the personal track at the 2016 CMA awards. The combination that no one could have predicated gave new dimension the song.

6. "Jenny From the Block" -- Jennifer Lopez and Taylor Swift

Taylor Swift is not only the reigning queen of pop, but she’s also the queen of duets. She is known for bringing celebrity guests to sing with her throughout her colossal tours. The sweet nostalgia of this song, combined with the excitement of seeing two superstars sing together, makes this song truly special.

7. "Without a Fight" -- Brad Paisley and Demi Lovato

Another example of a Texas native going back to their country roots, Demi Lovato teamed up with Brad Paisley to create this moving country pop hit. If Demi ever wanted to create a country album, we wouldn’t be mad about it because this song is addicting.

This duet isn’t so much unlikely as it is impressive. Ariana Grande’s voice is off the charts incredible and pairing her with an icon such as Stevie Wonder practically guarantees a work of musical art. Although I pictured their collaboration as slow and sweet with a soft piano background, this upbeat pop track is unexpectedly amazing.