8 Biopics Hollywood Needs to Make (And Who Should Star in Them)! 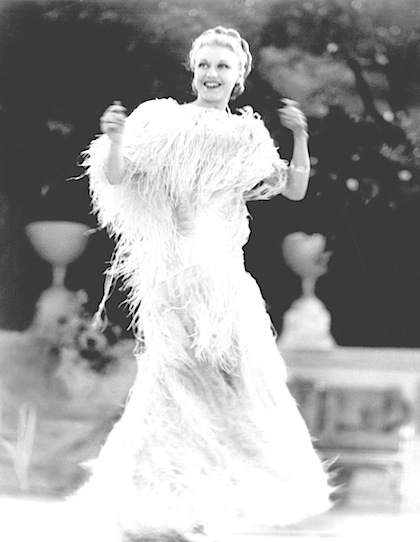 Biopics, biopics, biopics! I’ve written at length about them here on YH.com (possibly to the point of nausea), and indeed they have been perfect Oscar fodder for decades now. This year past year was certainly no different, with three of the nine Best Picture nominees being based on real-life events, and five performers nominated in the acting categories having portrayed real-life people.

Since 1990 alone, no less than TWENTY-EIGHT actors have won an Academy Award for stepping into someone else’s shoes, including Charlize Theron (as Aileen Wuornos in Monster), Phillip Seymour Hoffman (as Truman Capote in Capote), Helen Mirren (as Queen Elizabeth II in The Queen), and Cate Blanchett (as Katharine Hepburn in The Aviator). Moral of the story is, if you’re an actor and someone offers you a role in a biopic, YOU TAKE IT!

As is well-documented on this site, I sort of have a love-hate relationship with biopics. I LOVE when actors give a fantastic, well-rounded performance, even if the story itself is lacking. However, I HATE when actors merely do a passable impersonation of someone and then get an Oscar for it. There are so many factors in making a successful biopic, it’s a very delicate balancing act between getting the story correct and making the audience forget that you are Andy Kaufman and not Jim Carrey. Some actors get it completely right, not only physically embodying the person they are playing but also turning out a spectacular performance (see: the aforementioned Carrey in Man On The Moon, and also Daniel Day-Lewis in Lincoln, Anthony Hopkins in Hitchcock, Faye Dunaway in Mommie Dearest, etc.). Other actors, though more or less lacking a physical resemblance, still completely captivate you and pull you into that world (David Strathairn in Good Night and Good Luck, Forest Whitaker in Last King of Scotland, Amanda Seyfried in Lovelace, etc.). Then there are those actors who merely do an uncanny SNL skit-like impersonation of the person they are playing and often subsequently find themselves clearing off their mantle for a shiny new Oscar for their efforts (Blanchett, Hoffman, Reese Witherspoon, Michelle Williams, etc.). And then there’s Johnny Depp as J.M. Barrie, but we won’t go there…

All this somehow leads me to my point that there are some biopics out there screaming to be made, if only because there are actors right now who could so perfectly embody these real-life subjects! Why I am the first to think of them, I’m not sure. Either way, here are 8 (and a half) biopics that need to be made right now! 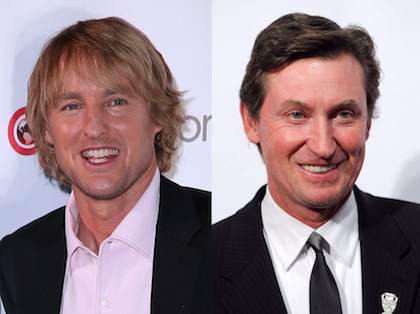 Producers will have to jump on this one fairly quickly, because Owen ain’t getting any younger. However, he still carries a youthful vibrancy, and most studios are equipped with really fantastic anti-aging software, so this one could be pulled off. From his facial features (including a very hockey-esque broken nose) to a very similar cadence in his speech patterns, Wilson is the perfect choice to play The Great One in the story of his amazing life as hockey’s greatest player ever. But because Owen is in his 40s now, perhaps the story can focus more on the second half of Wayne’s career, as he was nearing retirement, when he was no longer scoring 100 goals every season but still looked upon as a leader and Canada’s Golden Boy. What pressure! What drama! What a stretch for Owen Wilson!

I don’t know how I am the only one that sees this. There have been several movies made about serial killer Ted Bundy over the years (one of them starring “NCIS”’s Mark Harmon), but they all seem to either go overboard with the intensity or not enough. Bundy was a cunning, manipulative man, who was able to charm the pants off of everyone while simultaneously offing scores of innocent woman. Kinnear, aside from looking eerily like Bundy, has that perfect blend of casual charm with a sort of unsettling menace just beneath the surface. Sure, he’s smiling now, but he could SNAP at any moment! And just like that, you’re a Missing Persons poster. If someone wants to make an honest, creepy, non-Lifetime-Movie-Of-The-Week biopic about a truly frightening criminal, Greg Kinnear is your man. 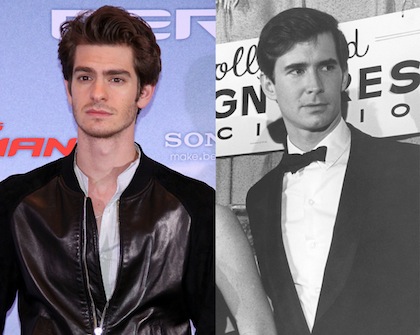 I briefly touched on this back when Hitchcock was still in development. Unfortunately, I didn’t get my wish, but there’s still a chance, people! The first time I sat down and watched The Social Network and Andrew Garfield appeared on screen, I thought some Voodoo priestess had resurrected Tony Perkins and cast him as a Harvard geek. From his looks and his body language all the way to his gestures and speech patterns (Garfield is British, go figure!), Andrew Garfield basically IS Perkins reincarnated. The late actor had a pretty, um, colorful life before he died tragically in 1992 at the age of 60 from AIDS. Tons of people knew him personally, but no two of them had the exact same perception of him, which I find fascinating. Who WAS Anthony Perkins really? A really great biopic can explore this, and who better to embody him than the 29-year-old actor who is basically embodying him on a daily basis anyway? 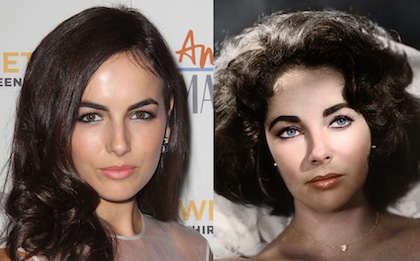 Sorry, Lindsay Lohan. Yes, Elizabeth Taylor is no stranger to getting the biopic treatment; in fact, a pretty terrific 1995 miniseries starring Sherilyn Fenn already exists. But when it comes to considering someone for a big budget, big screen version of Liz’s story, I don’t know why you would look any further than Camilla Belle. I mean, have you SEEN her?? She is still young, though, and she probably has not yet developed the chops to portray Liz in her Virginia Woolf days, so I would propose a film that focuses solely on Liz’s young adult years – after National Velvet but just before she met Richard Burton, when she was a 1950s starlet who had survived child stardom and was finding her voice as a serious adult actress; who had already survived four extremely tumultuous marriages before she was even 30 years old. That is a fascinating chapter in Taylor’s life that often gets glossed over in an effort to get to the “juicy” bits (i.e.: her marriage to Burton). Camilla Belle would be perfect to portray Liz during these formative times. 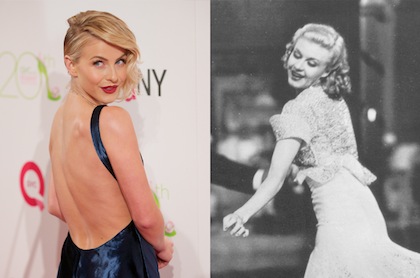 This one is pretty much a no-brainer. First of all, Hough is the spitting image of Golden Age Hollywood movie star Rogers. They even kinda sound the same. But even underneath all those superficial similarities, these two ladies have had remarkably – almost creepily – similar career paths. She started out as a dancer, which is what brought her to Hollywood in the first place. Then they noticed she could sing, so they put her in a few musicals. This in turn led to some dramatic roles, and before you knew, she was a star! Notice I didn’t specify who “she” was in those last couple sentences – Julianne and Ginger are interchangeable! Now that Hough has momentarily put her dancing shoes away to star in a Nicholas Sparks flick with Josh Duhamel, one wonders if he career will continue to parallel that of Ginger’s – after all, Ginger eventually went on to win an Academy Award for Best Actress in 1941. Who’s to say that Julianne couldn’t as well? And I have the perfect role for her… GINGER ROGERS! 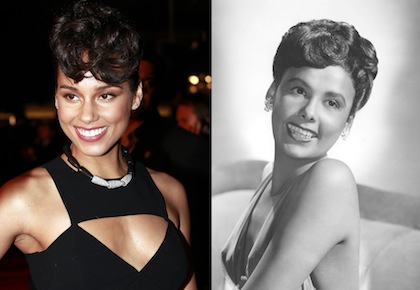 Again, I am shocked that this isn’t already in development somewhere. It’s always helpful, in biopics about singers, that the person portraying said singer has some singing experience already. It’s certainly not unheard of for someone known primarily for belting out tunes to appear in a movie and blow audiences away with their acting chops (Jennifer Hudson, anyone?). Alicia Keys has not really done any professional acting, but given the power and passion she puts into her musical performances, who’s to say she couldn’t translate that into a movie role? Aside from having a very similar look to classic jazz singer and actress Lena Horne, Keys has the pipes to go with it and would be dynamite in a film about Horne’s life! They’re also both native New Yorkers, just sayin… 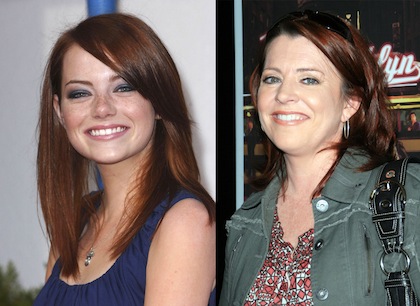 Okay, okay, I’m pretty sure a movie about stand-up comedienne Kathleen Madigan will likely not light a Hollywood producer’s fire. I just need to point out the fact that when I first saw Emma Stone (in The House Bunny), I thought someone had cryo-freezed Madigan and cast her as a college student. Even their voices and delivery are similar! So, okay, maybe there will be no Kathleen Madigan Story, but someone at least needs to cast her as Emma’s mom or something in an upcoming film! Amirite? Anyone? 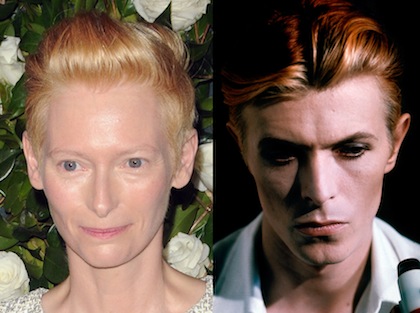 Yes, this one is kind of out there… but so is David Bowie. And so, for that matter, is Tilda Swinton. For a man who built a career on androgyny and blurring the line between the sexes, who better to play him than a woman who frequently does the same thing? Would that not be deliciously meta? Obviously, this would not be a conventional biopic, but it sure would be an interesting one!

So, there you have it. Hollywood, you have your orders – now get to it! (Email me for the address to send my royalty check…)