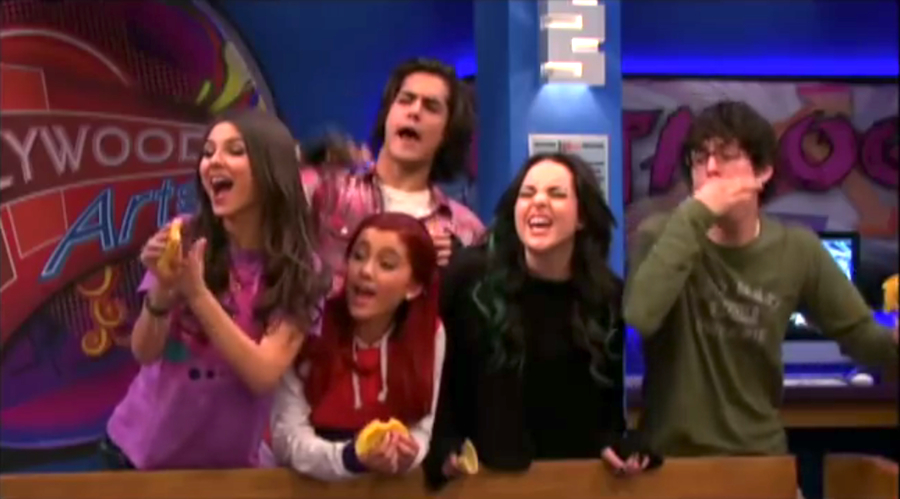 It’s truly hard to believe that it’s been 7 whole years since "Victorious" first aired on Nickelodeon! Yep, this week marked the 7th anniversary of the show's premiere, and even some of the stars from the show took to their Twitters to remember the good times they had on set and some of their favorite moments from the series. Ariana Grandetold fans that she missed bibble; Elizabeth Gillesremembered how obsessed everyone was over her relationship with Avan Jogia’s character, Beck; Leon Thomas III and Victoria Justice herself reminded everyone of how the past 7 years were great ones; and Daniella Monetwent all out posting some of the cutest pictures of all of them on set.

Now, we’re sharing with our beloved YH fans some of our own favorite moments for the show! Enjoy!

1. We loved how perfect Jade and Beck were for each other, even though Beck was actually nice and Jade was this rather crazy goth chick who loved dark things and violence. Beck was the only one that knew how to tame her and be there for her when she wanted to hurt Tori or Cat.

2. Remember the episode where Tori dated a playboy and when she found out his true nature how the other characters helped to humiliate him on stage as Tori sung a song about him? The song was called "Beggin’ on Your Knees”, and we just couldn’t get enough of this episode, for in truth sometimes boys can be this way, but you don’t let those types get you down -- instead, like Tori, become empowered to either humiliate them or show these types you can’t mess and hurt women!

3. Their school, Hollywood Arts, actually embraced the arts by making their students audition to get into the school and making them perform or act in plays, and what we loved even more was the scene where each of the characters got the chance to decorate their lockers to showcase what was unique to them. For instance, Andre (Thomas) decorated his with an actual working piano, which, yes folks, inevitably attracted women, but it was still cool. We also loved Tori’s locker, which was decorated in lights that lit up to say "Make it Shine" -- the name of the theme song to the entire show!

4. What a great character Sikowitz was. While his mind wasn’t fully intact, he still managed to somehow teach his students legitimate acting skills that are actually useful in today’s world. For instance, he taught them exercises like how to construct scenes that begin with a certain letter of the alphabet, which helped to further enhance their improv skills, and it also taught them how to stay in character no matter how difficult it may be.

5. We liked Robbie’s annoying puppet Rex, who not only knew everything about Robbie and had no problem exposing them to others but we actually think that, in a way, the puppet made the show even funnier and it alluded to trying to get those who are shy to break out of their shell and have more confidence.

6. Gotta say, "The Blonde Squad" was one of my favorite episodes. In it, Tori, Cat. and Jade each got to play characters that were blonde for their roles in one of their friends' movie. But it wasn’t just about them having to play roles that was interesting -- the interesting part was the fact that the episode featured stereotypes that most people associate with blondes.

7. Another one of my favorite episodes is “Andre’s Horrible Girl”, which focused on a mean girl who she felt like she could get whatever she wanted and away with doing whatever just because her Daddy was in the big time. You would see Andre being controlled by this girl and him ignoring the warnings that his friends gave him about how impossible she was to deal with, until he got a taste of his own medicine and finally came to his senses, humiliating her and finally teaching her a lesson that, just because your father is well off does not give you the right to treat others badly.

We’re glad to see the stars of "Victorious" going on to bigger and better things, but we do hope that in a couple years they’ll come back together to do a reunion show, or at least we hope that they will gift us with more hit songs and music videos featuring all of them together!

What's YOUR favorite moment from "Victorious"?