6 Questions I Had After Watching "Squid Game"! 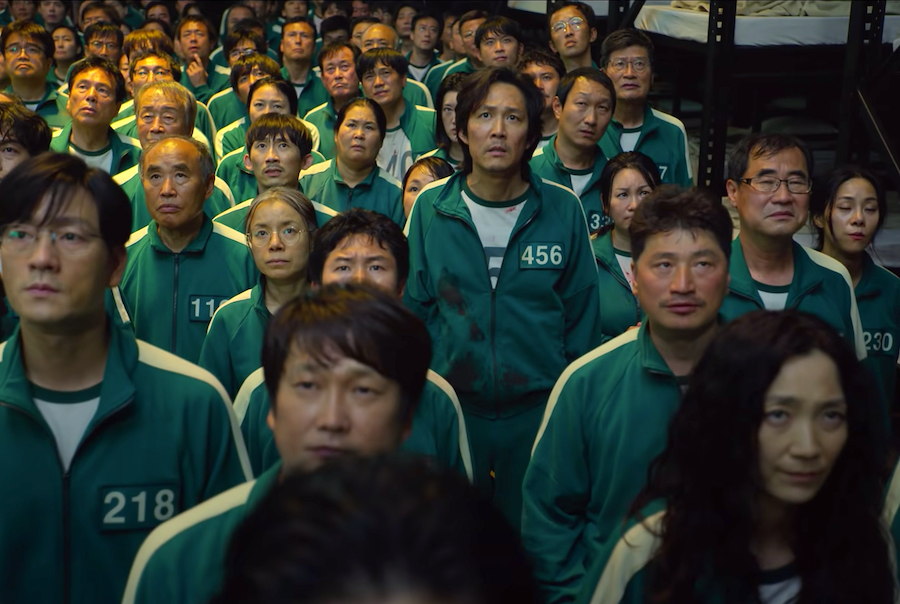 [NOTE: Since this article was originally published, a second season for "Squid Game" has been announced -- hooray!]

By now, everybody has seen “Squid Game” – and when I say “everybody”, I MEAN everybody, as the Netflix thriller has become the most-watched series in the streamer’s history! Pretty impressive on its own but even moreso because of the fact that it’s 99% in Korean. It’s been historically tough for non-English language content to break through into the Western mainstream like this, but the last few years – especially with Parasite winning the Oscar for Best Picture – people are becoming less afraid to read subtitles. That, along with some major word-of-mouth and social media buzz (personally I started watching just so I could understand half the memes on my Twitter feed), has contributed to this show’s success.

As a refresher, the series is about 456 people on the brink (or in the midst) of financial ruin who are invited to take part in a series of life-or-death games in the hopes of winning a significant sum of moolah. The games they play are based on classic children’s games, like Tug-of-War and Red Light, Green Light, only this time, if you lose, you die. Unlike, say, The Hunger Games, though, these games are 100% voluntary – the competitors are given the option to quit (and they do, after the first game), but most of them decide that playing the worst game of Marbles ever is better than whatever lives they were leading in the real world, and so they return.

While there has been no confirmation at this time as to whether or not there will be a second season (though series creator Hwang Dong-hyuk says he is “contemplating” it), the show left me with a few questions nagging at the back of my brain:

1. What happened to the other winners?

Thanks to Jun-ho’s snooping, we found out that these games have been going on annually for decades, and each one has apparently yielded a winner (including his missing brother). So what happened to these people? Where did they go? What did they do with all that money? How did they even explain how they got so much money? (To that end, how did Gi-hun explain it? His banker didn’t really seem to care, but if you put that much money into a bank, that would raise some red flags somewhere, no?) In Episode 8, it is revealed that the Front Man is Jun-ho’s missing brother – if there is a second season, perhaps it will focus on what became of the former winners of the games and how Jun-ho went from game player to game winner to game maker...

2. Why didn’t Gi-hun reach out to Ali’s wife & kid or Sae-byeok’s parents?

A year after Gi-hun walked away the winner of the games, it is revealed that he has barely touched any of his prize money. It’s not until he decides to leave Korea and head to the U.S. to be closer to his daughter that he leaves a large chunk to Sang-woo’s mother and Sae-byeok’s little brother, both of whom he made promises to before they died. (I assume he kept a little for himself to fund his trip & new life in America, as well as that sweet new K-pop ‘do.) But why didn’t he reach out to other family members of players he had become close with? When he tried to quit the games during the last challenge, it was presumably because he wanted the money to go the families of the dead (which was explained in Episode 2). So, once he ended up with the money himself, why didn’t he make good on it? Why didn’t he try to get Sae-byeok’s parents out of North Korea? Why didn’t he try to find and provide for Ali’s wife and child? Instead he just let the money sit there and even resorted to asking his banker to loan him 10,000 won (which is about 8 bucks in American money)...

3. What was the actual point of the games?

In the final episode, Gi-hun discovers that his buddy Player 001, aka In-Nam, was the mastermind behind the games. When he asks for an explanation, he says it was because… he was bored? Really? Like I get the idea that life becomes uninteresting for the insanely rich after a while – when you can literally have anything you want, there is nothing to strive for and achievements & acquirements become meaningless – but how did we go from “there’s nothing left for me to achieve” to “let’s pit humans against each other and watch them die for money”? Seems like quite an escalation but what do I know? I just hope the Kardashians never get this bored…

4. Why did In-Nam vote to end the games?

In the second episode, after all the players now realize what they signed up for, they all take a vote to quit the games and go home (which they are allowed to do according to the third clause in the contract they signed). They take the vote in reverse order of the players’ numbers, which means In-Nam, as Player 001, is the last one and also the deciding vote. After a brief deliberation, he votes to go home. In the final episode, it’s never really explained why he did this. Why would he vote to stop his own games? Was it because he knew the majority of the players would return? Is this something that had happened in previous games and he anticipated the outcome? He did seem to have a very shrewd handle on human psychology…

5. Did Jun-ho’s messages get through to his chief?

In Episode 8, Jun-ho escapes the island with tons of incriminating evidence that he recorded on his phone, and he scubas all the way to… another island. The Front Man and a team of staff members quickly catch up with him, though, and Jun-ho desperately calls his police chief back on the mainland and attempts to send him the evidence via text message. However, the Front Man tells him that the phone reception on that island is too spotty and the messages probably did not go through. Considering no backup or reinforcements ever arrived on the island, I guess he was right. But what if something did get through but they were just unable to track it? What if they have been trying to investigate it this whole time but just can’t get any definitive leads? In the final moments of the final episode, we see Gi-hun decide to stay in Korea after all, determined to take down the Front Man and the whole operation. Perhaps he is the key that Jun-ho’s colleagues need to finally crack the case!

6. Who are the staff members?

Throughout the games, the entire operation is a well-oiled machine thanks to a not-insignificant number of masked staff members. In Episode 3, one of them is forced to remove their mask by a desperate player, and it’s discovered that it is a rather young man. So who are these staff members? How are they recruited? They all exhibit an enormous amount of unwavering loyalty, as we never see one falter from their duties. So just who are these guys and why are they really there? What are they getting out of it? We know of a few staff members who take advantage of their situation by harvesting and selling organs of dead players on the black market, seemingly under the Front Man’s nose, but that is only a few out of the dozens of staffers and they still seem pretty steadfast in their regular duties until their shenanigans are discovered when they and Player 111 are killed. Does the Front Man’s true identity as a former winner of the games yield clues? Are former winners invited back to the games to serve as staff members?

Will any of these questions be answered? Will there be a Season 2? Honestly, I don’t think there needs to be – I think these are questions we can ponder without needing to be spood-fed any definitive answers. The series stands well enough on its own!