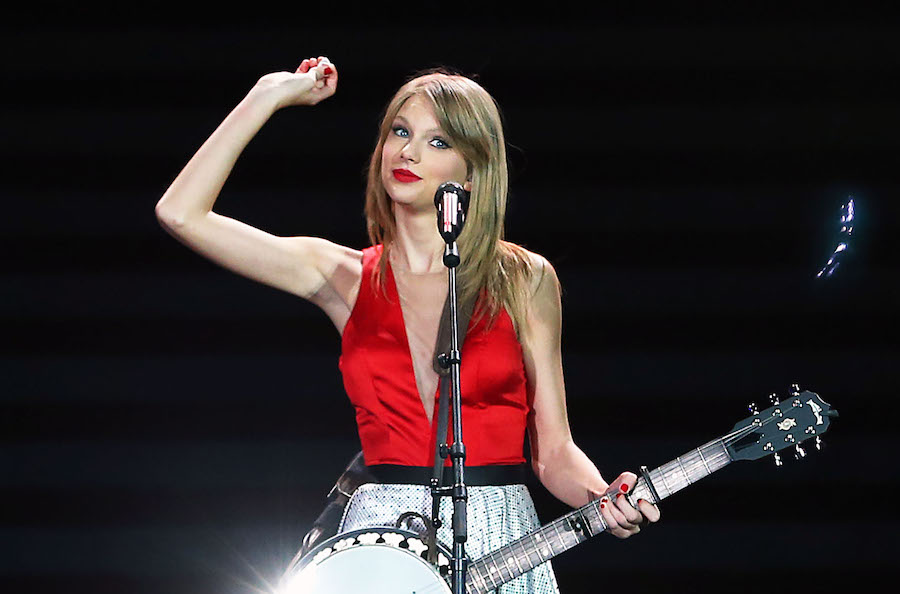 2012 was a time to be alive. We met Honey Boo Boo, found out who Gossip Girl really was, and saw The Hunger Games on the big screen for the first time. Nothing could prepare us, though, for the work of art that was (and is) Taylor Swift’s fourth album, Red. In honor of Miss Taylor Alison Swift releasing her re-recording of Red (Taylor’s Version) yesterday (November 12), plus a treasure trove of unreleased and unabridged songs, we’re breaking down one of the most important and impactful aspects of her Red era: the fashion!

I could write a 100-page thesis on Taylor’s bangs. Taylor first stepped out with her signature hairstyle back in 2010, but Red was the first album and tour during which she sported the cut. Her black fedora and straight bangs were the dynamic duo of hipster fashion, as well as the cover of the album.

2. The "We Are Never Ever Getting Back Together’" Tour Costume

This look still gives me chills to this day. It’s honestly my favorite stage costume of hers. Taylor’s circus ringleader-esque ensemble normally consisted of a red (obviously) sequin coat, black high-waisted shorts, and one of the most fabulous-looking bedazzled top hats I’ve ever seen. Taylor’s stage presence is already a force to be reckoned with, but this costume is what catapulted her into performer status.

The dramatic entrance is everything! #taylorswift#wanegbt#mtv#live#performance#tour#concert#swiftie

Lest we forget Taylor’s all-white Alice in Wonderland variation of the "WANEGBT" costume, which was on a whole other level when she wore it during her 2013 Grammy performance. The look was whimsical and gave a little Stevie Nicks vibe. It was everything.

Contrary to popular belief, Taylor actually invented the color red. She incorporated the color throughout the press and the tour. Blondie loves her little details, and she thought of everything: red color splashes in ads, her signature red lip color, and red all throughout the stage costumes and outfits of both her and her dancers (let’s not forget her guitar and mic). Taylor meticulously plans every miniscule thing, and her fans don’t let it go unappreciated.

5. The "Not a Lot Going on at the Moment" Shirt

Speaking of meticulous planning, let’s talk about this shirt. Taylor wore this now-iconic shirt in her "22" music video and paired it with the signature black hat and red lip. At first glance, it seems like your typical graphic tee you’d pick up at Forever 21, but we know better than to look at Taylor’s content with just a glance. In 2020, Taylor posted on Instagram and captioned it “not a lot going on at the moment.” Eagle-eyed Swifties did a little Nancy Drew-ing and speculated that the caption was a clue that Taylor was re-recording Red.

I probably think about Taylor’s shorts five times a day. Her cute top and high-waisted shorts pairings were the EPITOME of fashion back in 2012, and, let’s be honest, we all raced to our nearest JCPenney and devoured as many pairs as our parents would buy us. One outfit in particular is permanently etched in my mind for now and evermore: the black and white stripes with the red shorts. Iconic.

Red (Taylor's Version) is out NOW!