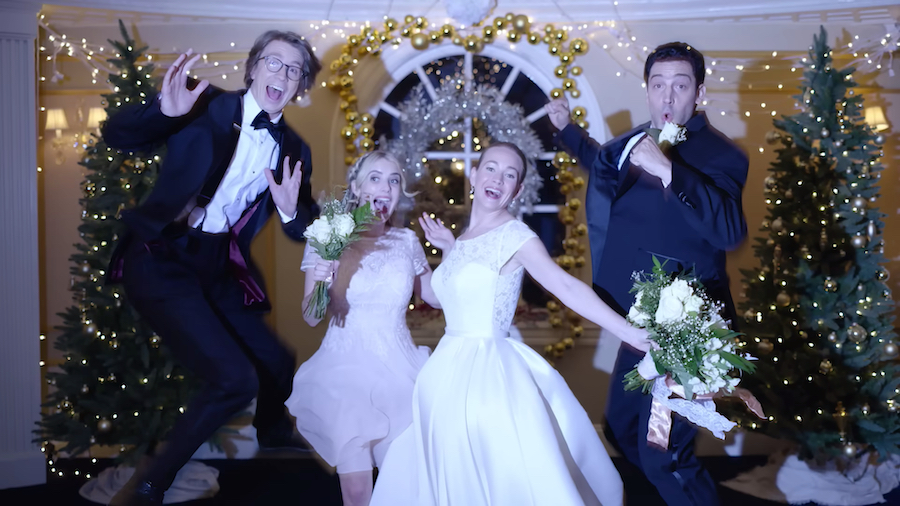 Holidays aren’t fair. You know why? Because once you fully get into the Christmas spirit -- with having a magnificent dinner, exchanging presents, singing carols and being cozy -- before you know it, it's over. But I’m sure we’d all love to extend the careless and festive feeling for a little longer, wouldn’t we? So, instead of being sad that Christmas is over, let’s focus on upcoming New Year’s Eve and reminisce this magical season. How? By watching the right movies, of course! There aren’t too many films specifically about New Year’s, but we still managed to make a great list of vibey movies for you to carry on enjoying the holidays!

One of the best comfort movies starts right on New Year’s night with the most iconic scene -- you know, the one, where Bridget (Renée Zellweger) is listening to “All By Myself” byCeline Dion, wearing the cutest and comfiest pajamas and drinking vine. Bridget’s story is truly motivating, especially if you want to make resolutions, take control of your life, and start the new year right. The film ends with a snowy romantic scene on Christmas, so you’ll have a glimpse of your favorite holiday as well.

Do you believe in fate? Because Margo (Emma Roberts) and Griffin (Thomas Mann) do, especially after it gets them together on a stormy New Year’s Eve, when Griffin’s Uber driver brings him to Margo’s home by accident (since they both had the same address name). These two got to spend the whole night together, having various adventures and constantly getting signals from the universe about true love and destiny.

The classic comedy takes place from Thanksgiving until New Year’s Eve, so it’ll be a great choice to reminisce about the holiday season. After the owners of a big company make a bet about trading two people on opposite sides of social hierarchy, Louis Winthorpe (Dan Aykroyd) and Billy Ray Valentine (Eddie Murphy) unknowingly become part of a crazy experiment. The ex-director Louis gets framed as a thief and drug dealer, while street hustler Billy Ray gets Louis's job. But when these two discover the evil plan of their bosses, they unite to take revenge. This classic and jolly film will definitely cheer you up!

Well, the title of this one is kinda self-explanatory. Imagine this: one city, New Year’s Eve, and many interconnected storylines, all of which are sweet and romantic. I guess it’s safe to say that this movie is the New Year’s version of Love, Actually with many amazing characters and even more amazing actors. Just look at the cast -- Robert De Niro, Sarah Jessica Parker, Zac Efron, Halle Berry, Sarah Paulson, Ashton Kutcher, Michelle Pfeiffer, and many, many more. It’s the perfect movie to watch before the clock strikes midnight.

Lucy (Sandra Bullock) is a lonely girl who works at a train station. She doesn’t have friends or family and feels quite miserable. Everything changes when her crush Peter (Peter Gallagher) gets pushed onto the tracks, and she gets him to hospital where all of his family thinks she’s Peter’s fiancée. Lucy finally obtains what she had been dreaming of for many years: a real family. The cute romantic comedy takes place from Christmas until the beginning of January, with a big New Year’s celebration, so we’re absolutely bringing it to the list!

If you grew up watching Charlie Brown and his gang’s adventures, this new holiday special will give you all the nostalgia. Charlie is trying to finish his resolutions before the New Year arrives, Snoopy reconnects with his family, while Lucy is trying to put on the perfect New Year’s party. And, of course, we can’t not mention the other holiday special called “Happy New Year, Charlie Brown”, where everyone enjoys the party while Charlie struggles with his homework assignment. So, consider this as a bonus recommendation.