5 Things You Need to Know About Guillermo Del Toro's 'The Shape of Water'! 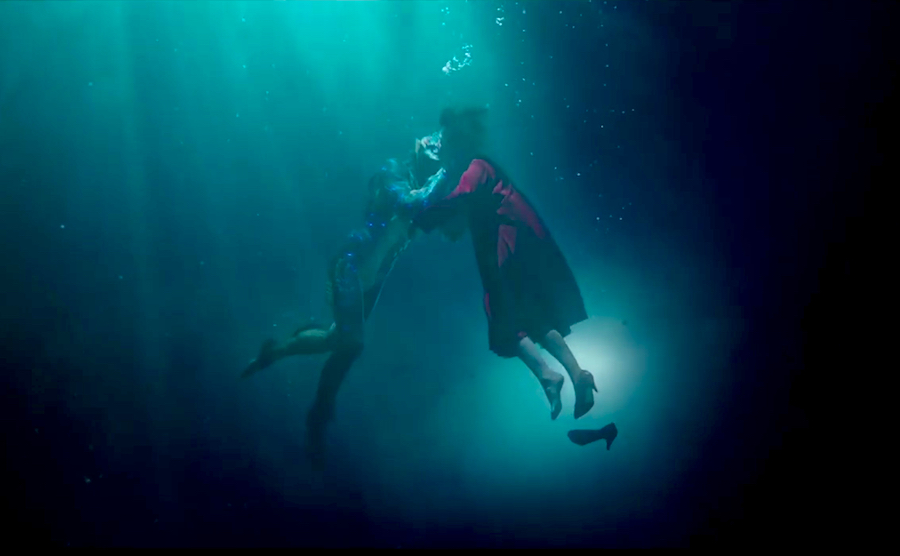 Imagine, if you will, the following scenario: director Guillermo Del Toro, wanting for his next big movie concept, throws a bunch of film titles from every era, genre, and style into a hat and retrieves two. He ends up picking Creature From The Black Lagoon and Amelie. This is how I like to imagine the idea for The Shape of Water came about.

As it should happen, that's not too terribly far off from reality, as Del Toro has explained that the inspiration for this film, which has been gaining tremendous buzz since the first trailer dropped this summer, was based on his desire to have seen more of the "relationship" between The Creature From The Black Lagoon and the Damsel In Distress from the classic monster movie. (Considering Universal Studios scrapped their Dark Universe franchise before it got started, this might be the closest we get to an updated take on the 1954 tale.) And if there is any director in the game right now with the cajones to really "go there" -- meaning, depict an actual intimate, romantic relationship between a human woman and human-like amphibian man -- it's definitely the guy who also directed Hellboy, Pacific Rim, and Pan's Labyrinth. Here's an artist who excels when he explores the connection men and women have with non-human entities, exposing our secret desires for the strange and unnatural. Del Toro's movies are almost like a safe space for those with unusual kinks and predilictions. He makes it almost OKAY to find, say, a humanoid swamp creature sexually attractive.

In anticipation of the film's (limited) release tomorrow (December 8), I got the chance to see the film myself earlier this week. As a connoisseur of the weird, especially where fictional romance stories are concerned, I was insanely curious to experience Del Toro's odd little fairy tale and fully prepared to immerse myself in what he had to offer. And I have to say, it was indeed quite the experience. Take heed, movie-goers, for this film is NOT for the feint of heart or the close-minded...

Here are 5 things you need to know about The Shape of Water (don't worry, no spoilers)!

1. Contrary to the many reports and rumors, there is NO fishman full-frontal! It is indeed discussed but never shown. In fact, all the hype about girl-on-swamp thing action is highly exaggerated. Yes, they do have a sexual relationship, and Sally Hawkins is nude quite frequently, but we don't actually see them do the deed. So if that's the only reason you're going to see this film, you're going to be disappointed. I myself was a little surprised that GDT didn't go further like we assumed he would (and which we were, frankly, primed for), but I suppose that was all part of his sly trickery -- by the time we get to the moment where Elisa (Hawkins) and Amphibian Man (Doug Jones) consummate their unorthodox relationship, we're fully prepared to take that ride. Yes, Del Toro made us WANT to see woman-fishman sex! GOTCHA!

2. Be warned, though, that this movie does have several very cringey moments which have nothing to do with a lady getting freaky with an amphibi-man. Del Toro may have pulled his punches where the lovin' was concerned but not in the violence/gore department. If you have a weak stomach for things like, say, a man tearing his own fingers off, be prepared to look away.

3. A unique thing happened in this movie where neither of the two lead characters can speak -- the supporting cast carries the load of dialogue. In the case of this movie, two of those supporting characters happen to be a Black woman and a gay man. The film takes place in 1960, a time when African-Americans and LGBTs alike found themselves living in silence. But in the case of The Shape of Water, these people not only have voices but actually HAVE to speak on behalf of those who cannot. Elisa's coworker, Zelda, played by the amazing Octavia Spencer, acts as Elisa's interpreter through much of the movie. Even when Zelda is derided and shamed by the white powers-that-be, she still has a voice, through Elisa. Sally Hawkins speaks not a word through the entire movie -- all her dialogue is either subtitled or, more often than not, spoken aloud by Octavia Spencer or Richard Jenkins.

4. And, okay, can we talk about Richard Jenkins, y'all? Because I don't think people have been talking about him enough. Yes, Hawkins is amazing in her primarily physical performance, Doug Jones is evocative under all that makeup as usual, Octavia Spencer is a delight, and Michael Shannon freaks us out again, but I haven't heard anyone talking about Richard Jenkins and his Oscar-worthy performance as Elisa's gay artist neighbor, Giles. It's almost too appropriate that he is the one that Elisa turns to in her mission to save her amphibious boyfriend, because Giles knows all too well what it's like to be judged for who you love, to be told that your desires are "wrong" or that you're a "freak". It's not quite the same, of course, but in the era that this film takes place, it was treated as such. Jenkins isn't the only supporting player who shines bright here, though -- also keep an eye on Michael Stuhlbarg as Dr. Hoffstetlar, the lab doctor who sees the creature as something more than just a monster or a Cold War pawn.

5. When you see the film, take notice of how the color green is used as a motif throughout. The design aesthetic itself is very eclectic -- a mixture of art deco, art nouveau, and mid-century, yet somehow it works. What ties it all together is the ever-presence of green. It is a color in equal turns reviled and desired. Michael Shannon's character is constantly munching on bright green candies, yet he is turned off by the green (actually teal) color of his new Cadillac. Giles has a fridge full of green key lime pie slices he buys from a guy who owns a pie shop whom he fancies, yet the pie itself is barely edible. And, of course, Amphibian Man himself is green -- a creature both reviled and desired.

Honestly, one could go on and on about motifs and themes and mise-en-scene and all that stuff for HOURS where this film is concerned. There are a wealth of filming and storytelling techniques that Del Toro employs to flesh out this tale, but at the end of the day, what really captures your heart and soul are the relationships. And the fact that Del Toro, along with his co-writer Vanessa Taylor, were able to present such a rich connection between these two lonely creatures with nothing more than actions and facial expressions is truly remarkable. The film explores that one fundamental desire of all conscious creatures -- the desire to be SEEN. Should it really matter who (or what) is doing the seeing, so long as they do?

The Shape of Water is more than just a movie -- it's a fully transcendent experience that's way more relatable than you think.