5 Things We Learned From The New 'X-Men' Trailer! 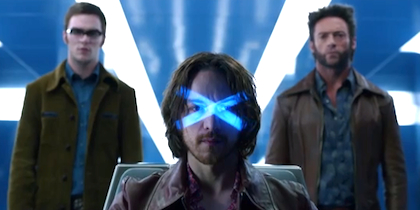 This week, an extended trailer for Bryan Singer’s X-Men: Days of Future Past hit the web, and there may be more questions now than before the trailer was released! However, we did get a glimpse into a couple elements of the movie that has all X-Men fans very excited.

Check out the new trailer here!

It’s obvious that there’s a lot going on in that trailer, so let’s break it down. Here are 5 things we learned about the movie from watching this trailer.

Even from the title, we can conclude that there will definitely be some time travelling element in the film. The trailer shows several characters and the actors that portrayed them in the first X-Men films, like Professor X (Patrick Stewart) and Magneto (Ian McKellen), that meet their younger counterparts from X-Men: First Class, Charles Xavier (James McAvoy) and Erik Lehnsherr (Michael Fassbender). We also see that Wolverine (Hugh Jackman) must go back in time to stop the catastrophic events of the future and will run into the X-Men of X-Men: First Class. Who knows what will happen when the past meets the future?

Part of the beauty that is X-Men is finding out about the different mutants and their abilities, so Bryan Singer happily brings to life a few new original characters from the comic books, including Quicksilver (Evan Peters), Warpath (Booboo Stewart), Sunspot (Adan Canto), and Bishop (Omar Sy), each with their own special talents to bring something interesting to the movie.

We see many, many of the old cast and characters back for this film. One of which is the beautiful and lovely Storm, played by Halle Berry, whose role I am most excited to see. The cast from the first X-Men films, as well as the First Class movie, will be back. Shawn Ashmore's Iceman will also be in full ice in this film and seems like he will get a good amount of screen time. We also see Ellen Page reprising her role as Kitty Pryde from X-Men: The Last Stand.

It’s hard enough for the mutants to learn to control their powers and get along with other mutants, but, as seen in previous films, the humans have waged war with the mutants. This war has brought some of the mutants together as well as split them apart. But in X-Men: Days of Future Past, it seems that the war between humans and mutants will never be the same with the introduction of...

Sentinels are the robots seen in the trailer. They don’t get too much screentime here, but their role in the film will be much-anticipated. In the comics, Sentinels are created to hunt mutants. I’m very excited to see Singer’s depiction of the Sentinels in the film.

There is a lot to be hyped about for the new X-Men movie after this trailer!

Don’t forget to catch X-Men: Days of Future Past in theaters May 23!