5 Superheroines That Deserve Their Own Movie or Series! 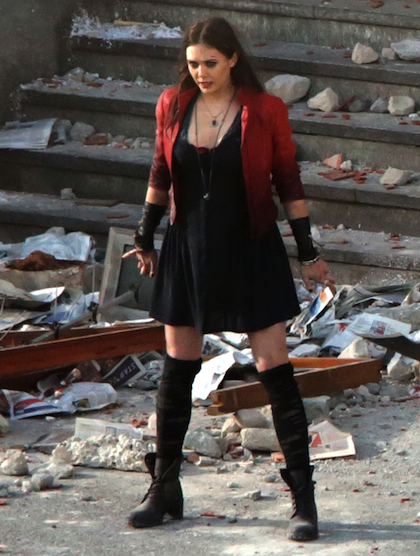 After spoofing the classic '90s rom-rom, She’s All That, with Michael Keaton, SNL followed up their parody movie trailer prowess by jumping on the Avengers train. With Scarlett Johansson, SNL gave us the Black Widow movie we never wanted:

But they brought up a good point. It's sort of a topsy-turvy world in Hollywood where female superheroes are concerned. A Wonder Woman movie has been in development hell for at least the past two decades (and the current one recently lost its female director); meanwhile, CBS picked up the pilot for a Supergirl series starring Melissa Benoist. There is a huge pool of superheroines to make movies about and just as many universes to choose from. Each superheroine has her own set of abilities, skills, and prowesses that can kick any evil villain’s butt!

There are so many projects I’d love to see not just featuring but FOCUSING on female superheroes. Here are just 5 in particular that I want to see star in their own film. (I tried to be as unbiased as possible as far as which universe they were from so as to avoid another Marvel vs. DC flame war!)

Ms. Marvel gained her powers from an explosion where her DNA began to merge with Captain Marvel's. Her origins with her powers and abilities were a bit rocky and dark, but she eventually found her place in the Marvel universe joining, and eventually leading, the Avengers. That's right, a woman led the Avengers. She has made appearances in many different comics throughout the Marvel universe, even having a rather terrible run-in with Rogue from the X-Men. I think it would be a great investment if a Ms. Marvel character was introduced in the next Avengers franchise film, especially if they really aren't going to delve deeper into Black Widow’s character.

Like all comic book heroes, Scarlet Witch has different versions of her origins and storylines. The sister of Quicksilver, Scarlet Witch already made her appearance in  Avengers: Age of Ultron, but I’m interested to see how and if the adaptation of Scarlet Witch in the X-Men films develops. Her powers include telekinesis, hex powers (manipulation of chaos magic), mind reading, and mind warping. With a huge potential to stir up two different film franchises, I would be surprised of Marvel doesn’t take advantage of Scarlet Witch’s versatility in both storylines.

Also with many different origins and plotlines, Starfire has a rich history of her powers. She was princess of the planet Tamaran, where she dealt with a very jealous and vengeful sister. Starfire has the power to absorb ultraviolet radiation and turn it into pure energy, giving her the ability to fly and superhuman strength and durability. She is also trained in hand-to-hand combat. She has appeared in the Cartoon Network/WB series Teen Titans and would make a great addition and introduction into the Tales of Titans series and even a film with other Teen Titans characters like Raven.

Mostly known for her connection to Green Arrow, Black Canary would make for a great female-centric superhero film. Although she was not born with nor adapted any super powers her fighting skills, physical ability and intelligence make her a killer superhero. She does have a Canary Cry that creates sonic vibrations strong enough to destroy windows and other objects. Having ties to Justice League and even Suicide Squad, I think Black Canary would make a great character to introduce to a wider audience.

Probably one of the most iconic female superheroes in history, Wonder Woman is the epitome of a strong, intelligent, and overall badass female hero. With her superhuman strength and combat skills, combined with her insane weapons like the Lasso of Truth, indestructible bracelets, and even an invisible airplane, the real wonder is why there hasn’t been a movie made about her already.  The best way to execute a Wonder Woman film and solidify why Wonder Woman is one kick-butt superhero is to show her as a stand-alone hero without the inclusion of Batman or Superman. Being able to showcase her as an independent hero strengthens her character and storyline.

Tell us which female superheroes you’d like to see get their own movie!