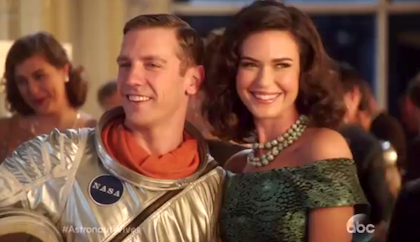 Sadly, the time has come to say goodbye to our favorite shows as we head into the scorching months of summer. While we enjoy days lounging by the pool and sipping some iced tea, there will be a slew of new shows for us to watch at night! So whether you are watching them from the comfort of your living room or on an iPad by the beach, here are some of the most promising new shows of the summer:

Based on the successful book by Lily Koppel, “The Astronaut Wives Club” focuses on a forgotten group of heroes in American history. While Americans often hail the astronauts such John Glenn and Buzz Aldrin as heroes for going where no man had gone before, the wives and families they left behind on Earth often get overlooked. Well, no more! “The Astronaut Wives Club” follows the spouses of the astronauts during the space race of the 1960s. These ladies became overnight celebrities themselves, all the while dealing with the stress of the very real possibility that their husbands may blow up within seconds of launching and forming a close bond known with each other. I’ve read the book, and it was one of my favorites from last year, so I’m excited for this one. (June 18)

If there is one thing the world could use more of, it’s The Rock. After recently setting the world record for the most selfies taken in a minute and saving L.A. from an apocalyptic earthquake in San Andreas, Dwayne Johnson continues on his glorious path with a show on HBO. “Ballers” follows a retired pro-NFL player as he attempts to figure out his next career move. The show will debut after the Season 2 premiere of “True Detective”, which means that it will get a nice lead-in, and who doesn’t want to see more of The Rock? (June 21)

Billed as a real-life version of Amazon’s successful “Transparent”, “Becoming Us” focuses on Ben Lehwald, a teenage boy living in Evanston, IL, as he comes to terms with his father transitioning into a woman. The show will follow the ups and downs as Ben's father goes from Charlie to Carly and divorces his mother; and in an ironic twist, Ben’s girlfriend’s father is also transitioning into a woman! Considering the fact that the transgender community still faces a great deal of adversity, it is promising to see major television networks shed a more positive light on these folks and educate the masses about what it means to be transgender. (June 8)

It’s finally here -- MTV’s television adaptation of Scream. The new “Scream” is essentially a reimagining of the original film, just set in modern times. The pilot begins with a YouTube video going viral, which sets off a chain of unfortunate events, including a catalyst for a murder, which sheds light on Lakewood’s nasty past. Bella Thorne, who is a guest star on the series, has noted that the show will pay some homage to the original; she herself will reenact Drew Barrymore’s infamous scene from Scream. MTV has done quite well with scripted fare lately (both “Teen Wolf” and “Awkward” are great fun), so I have high hopes that “Scream” will turn out just as well. (June 30)

This spin-off is for all you “The Walking Dead” fans out there. Set in the same universe as “The Walking Dead”, “Fear the Walking Dead” takes place in Los Angeles during the early days of the zombie apocalypse. The show follows a pair of teachers (Kim Dickens and Cliff Curtis), both of whom are divorced. Dickens's character also has two children -- an overachieving daughter (Alycia Debnam-Carey) and a son who dropped out of college (Frank Dillane). The creator of the show, Robert Kirkman, has mentioned that he chose to make the characters teachers because teachers possess intelligence, management skills, and the ability to deal with challenges. As a teacher, I thank Mr. Kirkman for acknowledging that we do possess all these skills, and therefore, would definitely survive a zombie apocalypse. (August)

Which show are you most excited to see this summer?