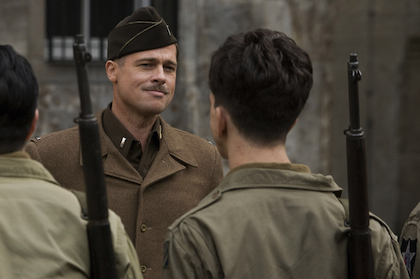 Director David Fincher has come out recently to state that the trailers for his new film Gone Girl might be a bit misleading, as the film will be “funnier” than the trailers would have you believe...

Nothing like a David Fincher thriller to bring in the laughs, right?! I don’t think Finchy would lie, though, about Gone Girl being funnier than the trailers depict. After all, Neil Patrick Harris, Casey Wilson, and Tyler Perry are in it too! And lest we forget that Ben Affleck has done his fair share of comedies in his time.

But Gone Girl would certainly not be the first film that turned out to be something completely different from what the trailers would have you believe! Marketing and publicity is a shrewd business, and the #1 priority is selling tickets. Sometimes that means stretching the truth just a smidge when it comes to what one's movie is actually about! To wit:

Drive (2011) – This film, from Danish director Nicolas Winding Refn, stars many different people, but mainly Ryan Gosling and Carey Mulligan, and the trailers that were releaed for it looked a lot like The Fast & the Furious and not at all like the slow burning art house film Drive actually is.

True, everything you see in that trailer is actually in Drive (except for the heavy rock music), but the tone of the finished film is completely different. Drive is about Ryan Gosling as an unnamed car repair man/Hollywood stuntman who moonlights as a getaway driver. He barely even speaks in the film, and the dialogue you see him deliver in the trailer might even encompass everything he says in entire the movie, but the avant-gardeness of Drive is also what make the film great.

This trailer tops my list because one woman even tried filling a lawsuit because she felt like she was personally pranked as a way of swindling her into seeing Drive. That’s crazy! No matter what, Drive is still something to check out if you haven’t already. The elevator scene alone is more disturbing and action-packed than all the of The Fast & the Furious films combined.

Red Eye (2005) – Horror master Wes Craven directed this film, starring Rachel McAdams and Cillian Murphy, which gave my friend’s little sister nightmares when we were growing up. She was convinced this was going to be scariest movie of all time… she was ten at the time.

As you can see, the trailer for Red Eye starts off like it’s a romantic-comedy, but this is a Wes Craven film, so we switch to a demonic or supernatural tone with the big reveal of the “red eye”! … Well, not quite. The shot of Cillian Murphy’s red eye never actually appears in the film itself. In fact, as you can see, Murphy’s eyes are little blue pools of wonder! The title of the film is simply a reference to the type of late-night flight the two characters are taking. But, I mean, come on, this is a Wes Craven film. Murphy has to be a serial killer stalking McAdams all the way to Miami. McAdams has to find a way to not die 20,000 feet above the ground with almost no way out, right? Hell no. Red Eye is actually about a murder scheme involving hotel reservations… Yeah. Where was that in the trailer?

On the flight, Murphy reveals himself to be a terrorist. Rachel works at a hotel where some unspecified political figure is set to stay, and Murphy knows this. So, yes, there is a stalker element, but it's more politically-based than supernatural. Murphy needs McAdams to get this politician into a waterside VIP room so Murphy and his terrorist buddies can fire an aquatic missile at the politician. If McAdams won’t agree to doing this, Murphy threatens to kill her father. Check out! There’s nothing like a good ol’ fashioned hotel-murder scheme.

Inglourious Basterds (2009) -- Quentin Tarantino’s WWII epic starring the likes of Brad Pitt, Melanie Laurent, and introducing the American public to Tarantino’s two-time Academy award-winning muse Christoph Waltz, was a fun film with a lot going on in it. The trailer got my now ex-girlfriend really excited about seeing an action packed WWII movie for the FIRST time (hence EX-girlfriend), and got me excited because of Tarantino. So we went to see it based on this trailer:

When the film was over, I was quite pleased with what I saw. There were three main storylines that all link together and leaves up for debate who the main character actually is, or if there even is one. It didn’t have all the action the trailer promised, but I kind of figured that going into it. It’s Quentin Tarantino after all. Aside from Kill Bill, we expect more witty and disturbing dialogue than endless hyper-violence. My ex-girlfriend, however, hated Inglourious Basterds because the trailer promised her non-stop gratuitous violence. (Once again, EX-girlfriend.)

A misleading trailer didn’t hurt the film either. It did promise that Nazis would be killed, and you bet your America-loving patriotic behind it delivers on that. Inglourious Basterds was so well received that the list of award wins and nominations has its own Wikipedia page just to keep track of everything!

Sweeney Todd: The Demon Barber of Fleet Street (2007) – Tim Burton is best-known known for his work on such films as Edward Scissorhands, Ed Wood, Sleepy Hollow, Charlie and the Chocolate Factory, Corpse Bride, and a slew of other films starring Johnny Depp, so It’s only fitting that when Burton remade an old story from the penny dreadfuls of the 1800s about a murderous Victorian-era barber named Sweeney Todd, he cast Johnny Depp, and, of course, his own wife, the talented Helena Bonham Carter. Since the 1800s, Sweeney Todd has seen many different film adaptations and was even made into musical.

Oh cool! Tim Burton is making a gritty, dark portrayal of a gritty and dark story. With Tim Burton behind it, it’s sure to be pretty whacked out and creepy. Well, if you didn’t know that Sweeney Todd had a musical adaptation in 1979 and musicals aren’t your thing, then maybe you would’ve been horrified by what you just saw in theaters. Yup, Tim Burton’s Sweeney Todd: The Demon Barber of Fleet Street is not at all what the trailer says it is. Get ready for plenty of death accompanied with plenty of song and dance numbers. Surprisingly, Danny Elfman did not compose the music.

Mrs. Doubtfire (1993) -- In honor of the late great Robin Williams, let’s take a look at film who’s trailer completely deceived adult audiences when they lined up at the theater, Mrs. Doubtfire.

What a sick, twisted-looking film, right? Imagine how you would’ve felt being an adult looking to see an absolutely horrifying serial killer thriller, only to see some family comedy about a man who just wants to be with his kids, so he poses as an English nanny to get close to his kids who he has lost custody of. I know for one that if I saw this I would’ve been down right…. Okay, okay, you got me. This isn’t a real trailer at all. This is a re-cut made by someone to make it look like a horror film, but it just illustrates my point that, with just the right amount of creative editing, you can make ANY film look like something completely different from what it is!