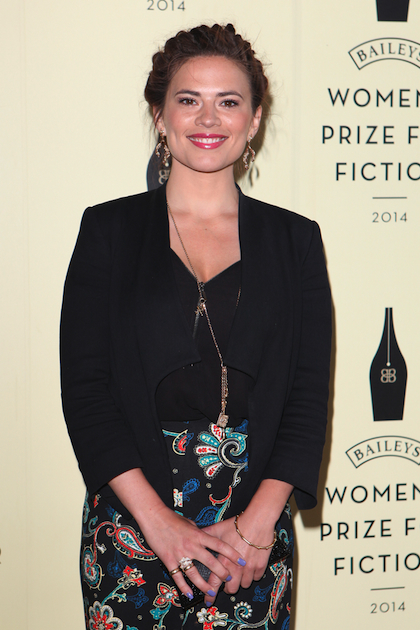 If you go through withdrawals between seasons of “Agents of S.H.I.E.L.D.” and Marvel Studios isn’t putting out movies fast enough to give you your superhero fix, then take heed, because ABC is about to hook you up!

The network has plans for another series taking place in the Marvel universe – I’d like to call it a spin-off, but that doesn’t seem to apply here. Okay, let me 'splain... For those of you who have the Iron Man 3 DVD, you were treated to a one-off feature called Agent Carter, which revolved around Captain America’s war-time lady love Peggy Carter. Well, what started off as just a little appetizer in a DVD’s Special Features section will now be a full-fledged TV series! Yup, Ms. Peggy is getting her own show, y’all!

Hayley Atwell will reprise her role as Steve Rogers’s main squeeze, who becomes a S.H.I.E.L.D. agent after Cap goes into his decades-long deep-freeze (unbeknownst to her – she believes he died in an explosion). It has just been announced that Dominic Cooper has been added to the cast, reprising his role as Howard Stark from Captain America: The First Avenger and a cameo in the Agent Carter featurette. The cast also includes Chad Michael Murray and James D’Arcy.

It will be great to see a show from not only the perspective of a kickass female but also in an entirely different time period! I think I might even be looking forward to "Agent Carter" more than I did "Agents of S.H.I.E.L.D."!

In the meantime (and speaking of "AoS"), check out our brand spankin' new Studio chat with Skye herself, Chloe Bennet!