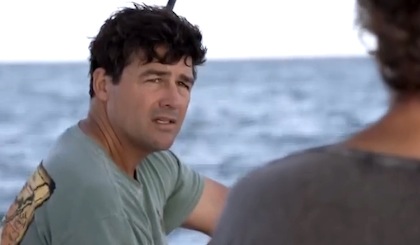 Let’s face facts, folks – Netflix is pretty much THE place to be right now for original serial content. From “Orange is the New Black” to “House of Cards”, the online streaming service is a force to be reckoned with, and they have the 10 Primetime Emmy Awards to prove it. And without the ominous presence of a “network” looming over their heads, the company has a ton more freedom to put out the kind of material you just won’t see on regular television.

One of the newest shows in their line-up is the slow-burning thriller “Bloodline”, which was released with little fanfare earlier this month. If you haven’t heard of it yet, that’s cool, but I’m here to tell you that the 13-episode series about family intrigue in the Florida Keys is well worth getting on your queue and spending the weekend binge-watching. Here’s why:

As someone who was born and raised in the Sunshine State, I am always curious about TV shows that take place there; the two that stand out are “Dexter” (Miami) and “American Horror Story: Freak Show” (Jupiter, my actual hometown). I have to admit, neither of those shows did it for me in regards to what it is actually like living in South Florida. Possibly because neither show was actually shot IN Florida (“Dexter” was filmed in Long Beach, CA, and “AHS” was filmed in New Orleans). But “Bloodline” takes place and was shot in the Florida Keys, which makes a huge difference in conveying the proper mood and atmosphere. It has that lifestyle down to a T, from the thin layer of sweat everyone sports from living in 90 degree heat with 80% humidity to bathing suits being a part of one’s daily wardrobe whether you’re actually on the beach or not. There’s also the constant background hum of a hundred different species of critters that come out at night to sing their songs, and the fact that everyone’s hair looks like $#!t thanks to the aforementioned humidity. Even the people themselves feel right, including Kevin Rayburn (played by Norbert Leo Butz) and his endless supply of graphic tees with marlins printed on them (a dime a dozen in SoFlo). If you want to get a taste of what Florida is REALLY like outside of the bizarre, sensational headlines of bath salts and white trash shenanigans, please do me and my fellow natives a favor and check out this show.

2. The acting is top notch.

With a cast that boasts Kyle Chandler, Sissy Spacek, and Sam Shepard as headliners, you already know it’s gonna be stellar. But they aren’t even the best part! Enter Aussie(!) actor Ben Mendelson, who plays the troubled black sheep of the family, Danny Rayburn, and is without a doubt the breakout star in this series. When I first saw the previews for this series, I admit I was a bit doubtful, because Mendelson doesn’t have what you would call that “leading man” quality… at least not to the degree of Kyle Chandler. But if I may circle back to my previous point, Mendelson has that Native Floridian vibe down pat. Aside from his chronic creepiness, I grew up with many Danny Rayburns. Actually, some of them WERE kinda creepy, now that I think about it… At any rate, if Mendelson and/or Chandler don’t at least pick up a couple Emmy nominations this year, I will be both surprised and disappointed.

As mentioned before, the series moves veeeerrrryyyy sloooowwwwly. In fact, this type of series is MADE for binge-watching, because I honestly can’t see it holding a viewer's attention from week to week. But if you buckle down and watch it in one sitting (or a few, in my case), it makes the pay-off that much sweeter. I’d even venture to say that they didn’t need an entire 13 episodes – 10 would have sufficed, as there are a couple subplots that were kind of unnecessary and didn’t seem to go anywhere. That said, though, it’s worth it to sit through those 10 or 11 episodes and watch this slow build-up, like lighting a decidedly long wick leading to a powder keg, before getting to the big explosive finish. And it all ends on a MAJOR cliffhanger!

In case it’s kind of hard to decipher what’s happening, here is a brief rundown: Kyle Chandler is the middle child in a family that owns an inn in the Florida Keys. His eldest brother, Danny, who has always been an outcast (for reasons that become clearer as the show progresses), returns home and causes all kinds of trouble within the family dynamic, which includes another brother, Kevin, and a sister, Meg. Danny’s reappearance forces everyone to confront a devastating event from their past, and possibly confront their own dark sides too.