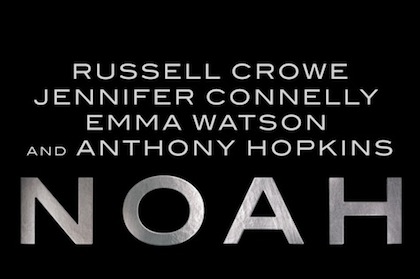 With all due respect to Evan Almighty, it sure feels like it’s been awhile since we’ve had a really good Biblical Epic. Thanks toDarren Aronofsky, we will soon be getting just that, as his 2014 movie Noah seems to hearken back to the sweeping, mega-budget Cecil B. DeMille flicks of days past.

And who better to slip into Noah’s sandals than Russell Crowe? The man won an Oscar for playing a gladiator, for crying out loud, so surely he is up for a lofty task as this. And while the historical veracity of Noah’s story continues to be debated, this film will surely go down in cinematic history!

Crowe is joined on screen by fellow Oscar winner Jennifer Connolly as Noah’s wife, and the legendary Anthony Hopkins makes an appearance as, appropriately enough, Methuselah (the Biblical figure most famous for being the oldest man who ever lived… see what they did there?).

The movie does, however, appear to play a little fast and loose with the Biblical account of Noah’s family – according to the Good Book, Noah had three sons: Ham, Shem, and Japeth. The sons, in turn, brought aboard the famous Ark their wives, and these were the couples that ended up repopulating the world after the devastating flood for which the Ark was built. But in the film, it appears that Noah has not 3 sons, but 2 sons and a daughter (played byDouglas Booth, Leo McHugh Carroll, and Emma Watson), none of whom look old enough to marry. Sticklers might raise a ruckus about this one, but it might not matter in the end depending on the overall message that Aronofsky intends to send.

Check out the trailer below, and let us know what you think – do you care that Aronofsky is changing the “facts” according to the Bible??