10 Tips to Help You Stay in The Loop on Super Bowl Sunday! 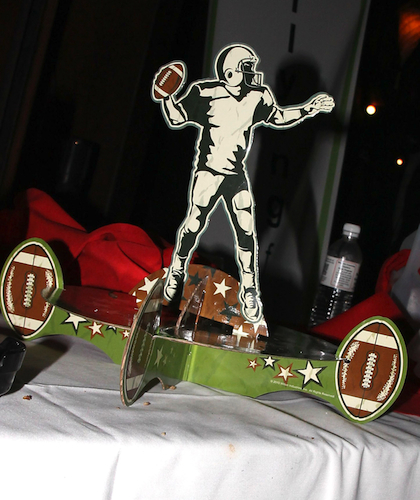 It's finally official! Super Bowl XLVIII is on February 2 and it will be between the Denver Broncos and the Seattle Seahawks. To me, Super Bowl Sunday is by far one of the most fun, exciting things on television and something that I wait impatiently for each year (growing up with two athletic brothers will do that to a girl). While most girls my age were learning the ins and out of how to apply make-up in their teens, I was learning the ins and outs of sports. Needless to say, I’m still afraid of using eye-liner…

Anyway, back to the Super Bowl. There’s a ton of hype for this event, and you’ll definitely want to be involved, even if you know absolutely nothing about football and/or haven’t been paying much attention this entire season. But there’s still hope for you! Chances are extremely high that you will be invited to a Super Bowl party or go to a bar to watch the Big Game, and the diehards decked out in their Super Bowl swag will be there in full-blown, game-time mode. When it comes to football, and especially the Super Bowl, guys tend to get a tad aggressive and fascinatingly obsessed. To be honest, it’s actually really intimidating for us girls to watch with them sometimes. Given all of the facts, and your future invite to that Super Bowl party, I’ve taken it upon myself to help a sister out. Here are my top 10 ways to impress (and be one of the guys) this Super Bowl Sunday.

1. Know the teams that are playing. Sounds pretty simple, but there’s more to knowing the teams than their colors and mascots. Do your research! Find out their star players, the coaches, and the quarterbacks. Not only will this keep you aware of the conversation, but you’ll also sound way better when you say “Let’s go, Broncos!” instead of “Go, blue team!”

2. Bring the goods. You wouldn’t go to your friend’s house to watch the Oscars without bringing a nice bottle of wine, right? Well, it's no different when you’re going to a guy's house; you have to bring something, whether it's a tasty snack or some refreshing beverages.

3. Play dress up! Before you break out the sequins and bows… Don’t. There’s a way to look hot and practical for these games, and it doesn’t involve those amazing stilettos you just bought. Pick your team and sport their colors: Throw on some navy and orange for the Broncos or bright green and navy for the Seahawks! Want to go neutral? Stick with navy and white and you can pick your side when you get there (depending on who the cute new guy is rooting for…). Slip into your favorite jeans -- you know, the ones that make your butt look super good and still manage to be comfortable? Yeah, those are the ones. And for footwear, my latest obsession is with wedge sneakers. They are casual, super cool, totally trendy, and absolutely perfect for that sexy sporty look you’re going for!

4. Get Engaged. Don’t go looking to put a ring on it, because the chances of that are slim. What I actually mean is to be engaged in the game! I know sometimes it's hard to give your undivided attention to a TV screen (except when "The Bachelor" is on, amirite?), but once you start, you won’t be able to stop! Know what’s going on on the field, and you’ll be able to feel included in the conversation.

5. Be a giver. If you’re at the bar, of drinking age, and financially able to, buy your friends a round of drinks. Boys pay for us ALL the time, we're actually really lucky. So, turn the tables around and treat them! Don’t feel like you have to do this the whole night, but do it once and they will definitely take the time to notice you in between that last play and the push for that touchdown. Hey, you might even get a high-five or for it too…

6. Pace yourself. If you're going to imbibe, don't be sloppy about it. Stay classy!

7. Take some notes. Before you go, learn a few simple rules of football. For example: They call them quarters, not periods or innings; There are two ways to put points on the scoreboard: touchdowns and field goals. You don't need to get into the nitty-gritty, but at least get up to speed on the basics.

8. Make a move. The best offense in the NFL is playing the best defense in the NFL. Without a doubt, it’s going to be super close and exciting. There will be ups and downs, and it’ll go back and forth, and I’m not just talking about the game! When you’re engaged and invested, you are going to be jumping up and down in your seat the entire time (and trust me, the boys will be on the exact same page). Move around and get physical a little bit. Cheering and physical movement are part of the game, and you will look silly if you’re sitting calm and composed on the couch the whole time. So, not only are you going to burn off the calories from that 7-Layer Bean Dip you’ve been nomming on all afternoon, you’re going to have way more fun!

9. Cut the chit-chat. Commercials are usually for chit-chatting with you friends, but with the Super Bowl, the commercials are almost as talked-about as the game itself! They are usually clever and hilarious (and they better be at $4 Million per 30 seconds….) and are brought up for months and even years after. So don't go turning the channel when the game goes on break!

10. Dig in. Everyone loves a girl with a hearty appetite who’s willing to indulge in the Super Bowl food selection. Spicy Buffalo Wings, Cheesy Nachos, Juicy Sliders, Pigs in a Blanket: Need I say more?? Don’t be afraid to get a little messy! I don’t think I’ve met a guy yet who isn’t completely turned on by a girl licking her fingers… BUT, if your New Year's Resolution is to eat healthier and lose that extra 20 lbs you’ve been carrying around since college, check out my future article for some healthy and low-cal alternatives to some Super Bowl favorites!

There you have it! Follow these simple guidelines and you’ll impress all of those boys who underestimated you in this setting! Now, throw on your jersey, get out there, and play some FOOTBALL!