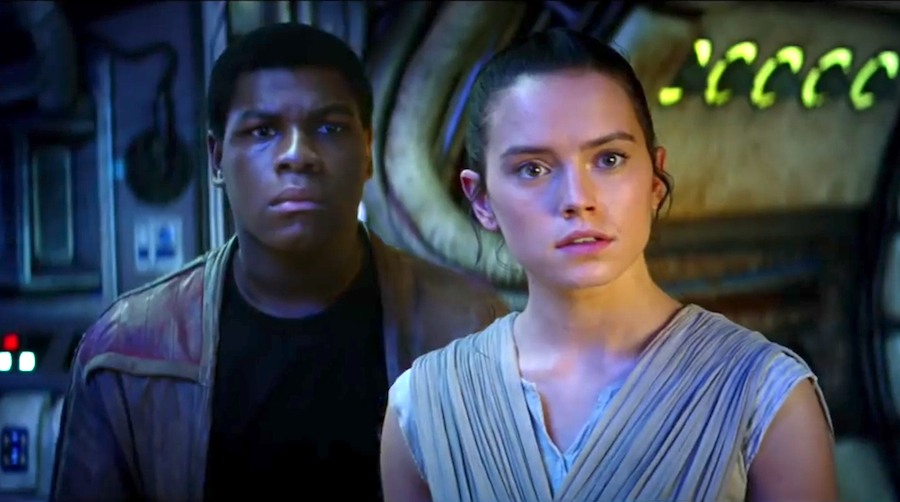 Now that Star Wars: The Force Awakens is officially the Highest-Grossing Movie Known To Mankind, that means the heaviest crowds have gotten their fix and I can finally make my way to the local family-owned IMAX 3D Googolplex to see it for myself. I even prepped by watching the original trilogy that I grew up with but only paid minimal attention to (skipping the prequels completely, like most everyone else did) so that I could be fully up to speed on what J.J. Abrams would have to add to this iconic series.

Truth be told, I… really really liked it. Like, I want to see it again. And not just for the intense action sequences and mind-blowingly fantastic visual effects. You guys, I woke up this morning wrought with FEELINGS.

Well, not so much a feeling as a need. As in, I need more.

I need more Rey kicking serious ass without compromising her femininity or sense of hope and compassion.

I need to know why Rey possesses the Force and why Luke's lightsaber was "calling out to her".

I need to know how Finn went from being a mindless henchman to having a SOUL.

I need more Rey and Finn bickering like an old married couple.

I need to know how freaking long wookies live??

I need to find out how Luke got a Terminator hand.

But mostly, I NEED MORE KYLO/REY. Oh yeah, I ship it hard. Yes, it’s problematic, but that’s what makes it so INTERESTING! Not that I want to see them end up together romantically, but I just need more of their Dark/Light Force dynamic. I NEED a scene in Episode IX where Rey reaches out and touches Kylo on the side of his face that she slashed open, the same side that Han touched before falling to his death(?), and imbue him with her Light and see him COMPLETELY FALL APART because of it.

Because, look, if the new trilogy is basically rehashing the original one, then we know an angsty redemption arc is coming for Kylo, and I wanna see Rey be the Luke to his Vader. I need this to happen.

Please, and thank you.