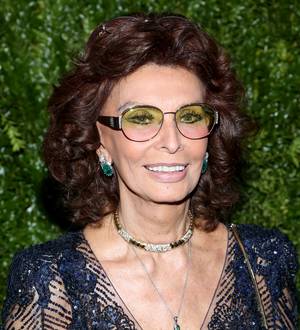 Movie legend Richard Burton turned Sophia Loren's home in Italy into his own personal rehab facility as he prepared for their movie The Voyage in the early 1970s.

The new mother had never met Burton when he called unexpectedly and invited himself to stay.

In a new extract from her upcoming memoirs, published in Britain's Daily Mail newspaper, she writes, "The phone rang just as I'd finished breastfeeding one son and was dealing with the noisy demands of the other. On the line was a man who announced himself as Richard.

"I knew my husband had lined him up to star with me in The Voyage, which was due to start shooting later in 1973. Naturally, I hadn't expected to meet him till then - but Richard had an unusual request: 'If you agree, I could come and stay with you before we start shooting. You know, I have to get back in shape and I don't really feel like living out of a hotel. They wouldn't leave me be'.

"By 'they', he meant the reporters and paparazzi who'd been filling the gossip columns with tales of Burton's marriage to Elizabeth Taylor, which had reached crisis point a few weeks earlier. Which is how Richard Burton came to stay at Villa Sara, our 16th-century estate near Rome, complete with his entourage, which included a doctor, a nurse and a secretary. As he told me later, he was trying to quit drinking, as well as to get over his love for his beautiful violet-eyed wife."

Loren recalls Burton was the perfect house guest, but things got a little tense when Taylor summoned her husband back to Los Angeles so he could be with her as she underwent an operation to remove an ovarian cyst.

The Italian star writes, "'You have to be joking', I wanted to say, but I held my tongue. After all, it was Richard's life and it was better if I kept out of it. Perhaps he read my mind: he threw me a helpless look, as if to say: 'What can I do? Of course I can't say no.' (Loren's director husband) Carlo (Ponti) understood immediately. 'Go on, go ahead - as long as you're back on the set on Monday morning', he said.

"So it was that Richard flew 15 hours to LA, and another 15 hours back, just to hold Liz's hand for a few minutes. Still, he'd fulfilled his duty and felt at peace with himself. Plus, he was there for the first cry of 'action' on Monday."

However, he didn't serve up his best performance.

Loren explains, "Although Richard was there, his mind was wandering elsewhere - in search of a solution to his problems. Some months later, the marriage was over, and he wasted no time letting me know. By then, we were preparing to go to England to star together in a 1974 remake of Brief Encounter. It was at this point that Richard wrote to me. In his letter, he's as facetious as ever, but he also talks about himself in an authentic, profound way, and rejoices in the friendship that unites us.

"'Have read script... I shall see you in one week from today... I'm completely recovered from my recent madness and have rarely felt so content. Elizabeth will never be out of my bones but she is, at last, out of my head. Such love as I had has turned to pity. She is an awful mess and there's nothing I can do about it without destroying myself. I love you. I'm looking forward to seeing you with immense eagerness... This time I shall be a good actor for you. I was a bloody idiot last time.'"

Loren's memoirs, Yesterday, Today, Tomorrow, will be released on 3 November (14).