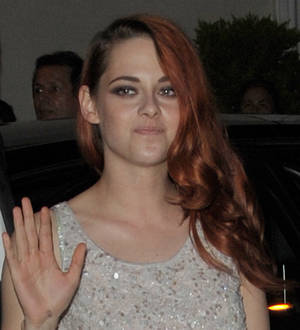 Kristen Stewart has made history by becoming the first ever U.S. actress to win a prestigious Cesar Award, the French equivalent of the Oscars.

The Twilight star was feted with the best supporting actress accolade for her role in Clouds of Sils Maria at the ceremony in Paris, France on Friday (20Feb15).

Stewart thanked her co-star Juliette Binoche in her acceptance speech saying, "Juliette, thank you. I'm standing in front of a room of people that I don't need to tell about the power of Juliette Binoche... Everything that was happening to me in that film was just me reflecting her. Thank you all. I'm very happy to be here."

The night's big winner was 2014 drama Timbuktu which swept the board with seven awards including best film and best director for Abderrahmane Sissako.

Despite leading with 10 nominations, fashion biopic Saint Laurent, based on the life of Yves Saint Laurent, only landed one prize for costume design.

The best actress award was handed to Adele Haenel for Les Combattants, while the winner of best actor was Pierre Niney for his role in Yves Saint Laurent, another film about the legendary designer.

Sean Penn received an honorary Cesar Award, which is handed to a foreign actor to recognize their contributions to the movie industry.