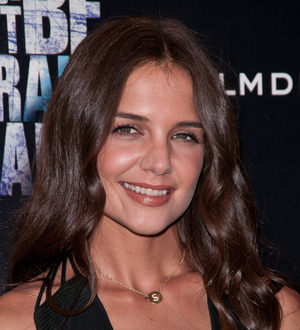 Hollywood actress Katie Holmes is following in Lady Gaga's footsteps - she's signed on to judge an upcoming episode of talent show So You Think You Can Dance.

The Batman Begins star has been invited to sit on the judging panel alongside Nigel Lythgoe and Mary Murphy, while High School Musical director/choreographer Kenny Ortega is also set to make a special appearance.

Holmes, a big fan of the TV competition, revealed the news during an appearance on talk show Late Night With Jimmy Fallon on Tuesday (09Aug11), shortly before jetting from New York to Los Angeles to fit the taping into her tight schedule.

She said, "I'm flying out tonight and going to be a guest judge on So You Think You Can Dance with Kenny Ortega, Nigel and Mary. I love that show."

It won't be Holmes' first appearance on the hit programme - she showed off her singing and dancing skills in 2009 when she filmed a video tribute to Judy Garland to promote kids' charity the Dizzy Feet Foundation and mark the show's 100th episode.

Gaga broke down in tears after becoming overwhelmed by one contestant's performance during her a stint as a guest judge on the show last month (Jul11).