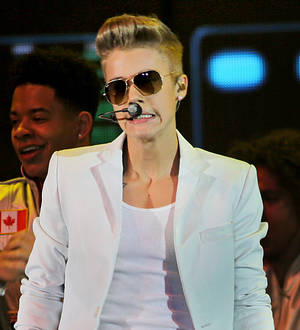 Justin Bieber has dismissed reports suggesting he pulled out of a planned U.K. TV interview on Saturday (09Mar13), insisting he was never booked for any appearance this weekend.

The pop superstar was said to have axed a pre-taped chat on Ant & Dec's Saturday Night Takeaway amid troubles on his British tour, which has been marred by clashes with members of the paparazzi, health struggles and complaints about his late start to his London concert at the O2 Arena last week (04Mar13).

A TV spokesperson even confirmed that the singer had been "unavailable" for the variety program due to "other commitments", but Bieber claims he was never due to appear on the show in the first place.

In a series of Twitter.com posts on Sunday (10Mar13), he writes, "i see the tweets from the UK fans. I was never scheduled to be on any tv show saturday night. just rumors...again... i was always scheduled to leave the UK that day..."

The 19 year old also used the opportunity to silence claims he had sworn off ever returning to Britain after the drama of the past few days.

He tweets, "I loved every show I had at the O2 this past week. the UK Beliebers (fans) are incredible... i will be back. and i will see u again. and I am grateful for all of u. U are what made some of the other stuff worth it (sic)."

Meanwhile, the Baby hitmaker has continued to experience issues on his Believe world tour - he has scrapped his Tuesday night (12Mar13) gig in Lisbon, Portugal amid reports of poor ticket sales. However, he is still due to perform in Portugal on Monday (11Mar13).