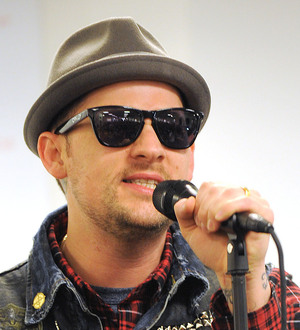 Rocker and doting dad Joel Madden has opened up his family photo album for a new magazine feature, showing off snaps of his two children with wife Nicole Richie.

The Good Charlotte frontman has shared cute shots of his daughter Harlow, three, and son Sparrow, 23 months, with Paper magazine readers, as well as pictures captured while on tour with his band in Europe.

One photo features Madden posing with his young kids on a fairground ride in Santa Monica, California, with a caption that reads: "Saying goodbye is always hard. On my last day in L.A. before leaving on tour, I always try and take my wife and kids somewhere fun. This was taken on the Ferris Wheel at Santa Monica Pier. Best day ever."

Madden also shows a screen grab of a video call with little Harlow, which he describes as "the very most important part of my day".