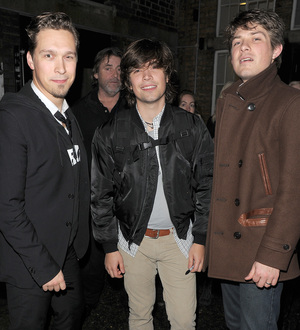 Hanson have yet to meet the real Katy Perry after spending a day with her latest awkward alter-ego on a video set.

Hanson star Isaac Hanson tells WENN, "We get a call from Katy Perry's people, saying, 'Hey, we're casting for this upcoming video and Katy really thinks that you guys would be perfect for this; you guys would be a band in the yard for the house party.'

"Then Katy called and talked to Taylor and we felt like it was gonna be fun... It was. But she was definitely enjoying the character she was playing. She was fully in high school, awkward mode.

"Technically, we didn't get to meet the real Katy Perry but she did send us a really nice note afterwards and was very kind. I imagine that won't be our last opportunity to say hello and hang out with her."