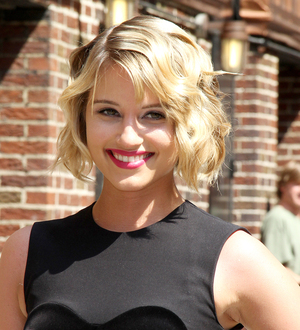 Glee star Dianna Agron hid a broken nose from her mum when her first high school party turned into a bloody mess.

The actress, who plays ambitious cheerleader Quinn Fabray on the hit TV show, persuaded her conservative mum to let her attend her first "real" party when she was a freshman - but her entire big night out was ruined by a fellow student.

She recalls, "I had convinced my mom to let me go to my first party. I was able to be there for an hour with two of my friends... (But) it accidentally turned into an argument. And instead of the girl punching the guy, she wound up to the side and punched me... (There was) blood everywhere."

However, Agron chose not to seek medical help or tell her mum about what had happened for fear she'd never be allowed to attend another party.

She adds, "I didn't go to a doctor because I didn't want to tell my mom what happened. Because she already let me go to my first party and she was nervous enough about that. (If she knew what happened) she would never let me out of the house."

Dianna Agron didn't realise just how much damage had been done until she saw a doctor for a respiratory problem last year (10).

She adds, "I found out about it year ago because things were getting worse and everything was getting really nasally and I went to a doctor. He said, 'When did you break your nose? You have a horrible deviated septum.'"

Medics weren't able to operate on Agron because she was in the midst of filming but, in an ironic twist of events, Agron suffered another punch to the face while dancing during a day off from the Glee! Live! tour this summer (11) - and the incident somehow put her nose back into place.

She continues, "We were in the middle of doing this concert tour and we had gotten into New York and we had a day off the next day. So I met some of my friends out and we were dancing. And there was a collision of sorts - again... It's fixed now!"