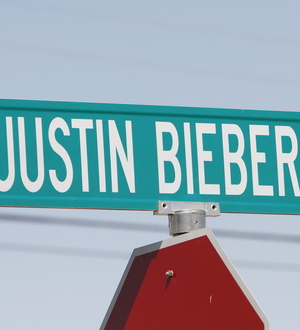 Justin Bieber's Texas street honor has been shortlived - a thief has stolen the road sign, two days after it was unveiled.

Caroline Gonzalez, an 11-year-old fan of the Baby hitmaker, won a contest to be appointed "mayor for a day" in the city of Forney and her first executive decision was to pay tribute to her pop idol, renaming Main Street to Justin Bieber Way on Tuesday (16Aug11).

But the sign went missing on Thursday (18Aug11) and Mayor Darren Rozell has promised to have it replaced immediately.

He tells CNN.com, "We don't know if it was really a crazed fan who decided they had to have it or what."