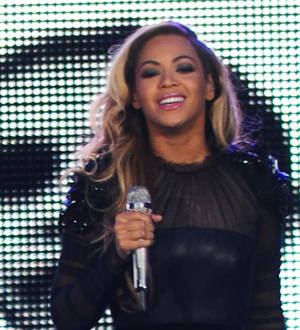 Beyonce battled through a sore throat to headline The Sound of Change charity concert in London on Saturday (01Jun13).

The R&B beauty thrilled fans at Twickenham Stadium by belting out hits including Run the World (Girls), Halo and Crazy in Love with her rapper husband Jay-Z, but she admitted to reporter Savannah Guthrie before the gig that she was struggling with a slight illness.

A clip of the newswoman's backstage interview with Beyonce aired on breakfast show Today on Monday (03Jun13), prompting co-host Natalie Morales to comment on the singer sounding "a little hoarse", to which Guthrie replied, "She did. She said she was struggling with her speaking voice. I said, 'How are you gonna sing?' She said, 'Oh it's different vocal cords.' Let me tell you, she sang her heart out; gave a great performance."

Jennifer Lopez, Florence + The Machine, John Legend, Jessie J and Ellie Goulding were also among the acts on the all-star line-up, while Madonna, Salma Hayek, James Franco and Blake Lively all made appearances onstage to promote education, health and justice for women worldwide through the Chime for Change foundation.

The sold-out female empowerment benefit helped to raise over $4 million for the cause.

Beyonce, who overcame a secret bout of tonsillitis at the start of her The Mrs. Carter Show World Tour in April (13), will have a few weeks to rest her voice and recover - she doesn't kick off the North American leg of her trek until 28 June (13), when she will hit the stage in Los Angeles.