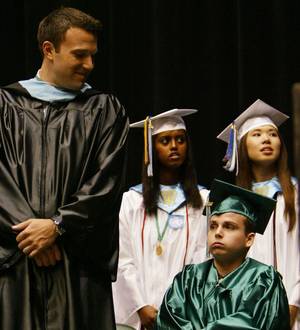 Longtime friend and fan of Ben Affleck, Joe Kindregan, has died at the age of 27 following a battle with a rare neurological disease.

Kindregan suffered from ataxia-telangiectasia, or A-T, a genetic, degenerative multi-system disease which causes severe disability. Most children with A-T are confined to a wheelchair by the age of 10 and do not survive their teens.

Affleck first met a then-10-year-old Kindregan on the set of the actor's film, Forces of Nature, in 1998. Affleck noticed Kindegran as he was watching them film on location, and invited him over to chat.

As part of the Make-A-Wish program, Kindregan attended the Hollywood premiere of Forces of Nature, and the two have kept in constant contact ever since.

Since striking up the friendship, Affleck has been an outspoken supporter of A-T research and fundraising, and he even testified with Kindregan before a House Appropriations Subcommittee in 2001, when the actor called on politicians to support stem-cell research and double the budget of the National Institutes of Health.

In 2007, Affleck served as the commencement speaker at Kindregan's 2007 high school graduation in Virginia, where Kindregan, who also struck up a friendship with Affleck's then-wife Jennifer Garner, joked while introducing his movie star pal, "He is married to the cutest girl (Garner)... but most important he is the best friend you could ever have."

Affleck responded, "You're right about my wife!", adding, "I'm here because what I learned about the distance between how you see someone and who they are, I didn't learn in Hollywood, I learned from a classmate of yours, my friend, Joe Kindregan."

Affleck gave Kindregan his film debut in 2012, when he played an extra in his Oscar-winning film Argo, and he even helped his pal celebrate a rite of passage for his 21st birthday by taking Kindregan and 10 of his friends to Las Vegas. To commemorate the once-in-a-lifetime trip, Kindregan inked a green four leaf clover on his upper left arm - a tattoo Affleck paid for.