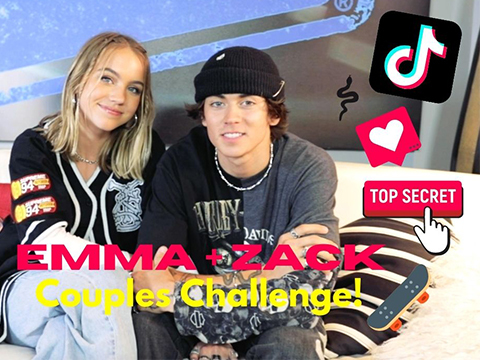 Even before their recent bombshell relationship reveal, Emma Brooks (formerly Emma Brooks McAllister) and Zack Lugo were already wildly popular on TikTok individually, Zack for his skating and dancing vids, and Emma for being a part of Just A House LA and bffs with Olivia Ponton. So it's no surprise that their big dating announcement broke the app, earning more than 10 million views and becoming a trend of its own! The cutie couple drops by the Young Hollywood Studio where we play the Couples Challenge to see how well they know each other since becoming a pair in the last 6+ months! Find out where they shared their first kiss, how Zack influenced Emma's jewelry preferences, Zack's favorite tattoo, and the mysterious figure who first knew they were official, plus they reveal what they are typically doing at 2am, their most awkward moments, and so much more!