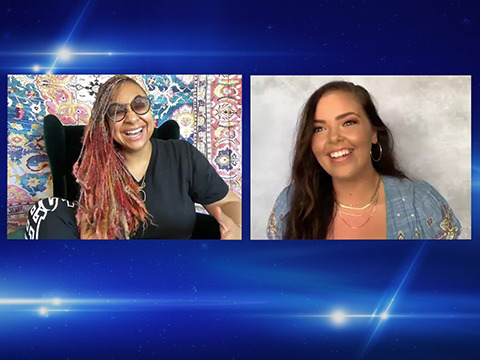 It is an unspoken truth that, at the end of the day, every Disney Channel series takes place in the same universe, and they could collide at any given moment! That's certainly what happened when the characters from "Raven's Home" took a wrong turn on their GPS and ended up at Camp Kikiwaka with the characters from "Bunk'd"! The star of the former, Raven-Symoné, and from the latter, Miranda May, join Young Hollywood via Zoom where they discuss this historic crossover event, entitled "Raven About Bunk'd", and how they themselves (along with Raven's co-star Anneliese van der Pol) ended up getting along swimmingly -- maybe a little too much so! They reveal some of their fondest memories from filming this episode and put some of their other co-stars on blast in game of "Who Is Who On Set", where they tell us who was guilty of eating the most snacks, taking the most selfies, who was the funniest, and more! "Raven About BUNK'D" premiered on Disney Channel July 24, and you can catch it again on Disney Channel and DisneyNOW!