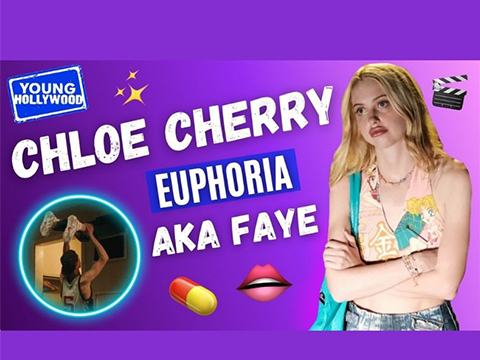 Not many folks can say that they were able to parlay a stint in a TV show parody into an actual role in the actual TV series, but Chloe Cherry is different! The actress has made quite a splash, to say the least, in Season 2 of the hit HBO drama series "Euphoria" as the character of Faye, a junkie living with Fez. Her presence has blown up on social media, so obviously Young Hollywood had to know more about this rising star! We met up with Chloe in L.A. where we indulged in one of her favorite past times -- making mood boards -- and chatting all things "Euphoria", including: the unusual casting process, the vibe on set, how her big debut was postponed due to the pandemic, and the guidance she received from series creator Sam Levinson. She also gives us some behind the scenes scoop on that car scene with Zendaya, plus she reveals which characters she is shipping!