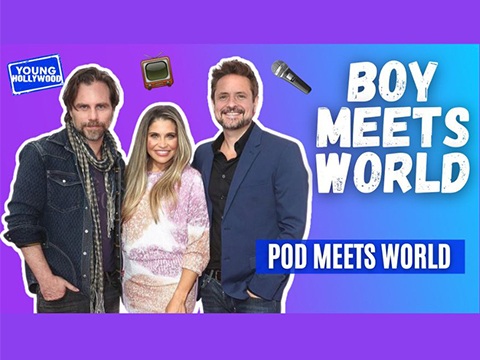 If you grew up with the '90s TV series "Boy Meets World", you're not alone -- the cast of the show grew up with it too! Now, all these years later, stars Danielle Fishel (Topanga), Rider Strong (Shawn), and Will Friedle (Eric) have come back together to reminisce about it all in a new podcast called "Pod Meets World"! Young Hollywood catches up with the iconic trio over Zoom where they tell us more about the nostalgic project, including how it's the first time they have ever watched the show together and how they take inspiration from fan feedback on what topics to cover in future episodes! They also share some hilarious memories from their days on set, from their love of a certain frozen treat, Danielle's first conversation with her co-star Ben Savage, and much more. Plus, find out what other stars from the show will be making appearances on future episodes of the podcast!