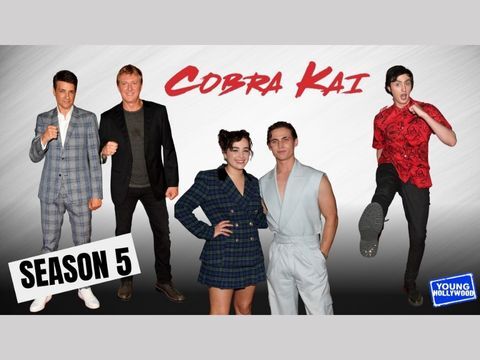 The world couldn't get enough of 'The Karate Kid' back in the 1980s, and now we can't get enough of "Cobra Kai" in the 2020s! The hit Netflix series celebrates its 5th season with a red carpet premiere in Los Angeles, and Young Hollywood is there on the scene to catch up with all your favorite stars from Cobra Kai, Miyagi-Do, Eagle Fang, and more, including Mary Mouser (Samantha LaRusso), Gianni DeCenzo (Demetri), Dallas Dupree Young (Kenny), Griffin Santopietro (Anthony LaRusso), and even the OGs themselves, Ralph Macchio (Daniel LaRusso), William Zabka (Johnny Lawrence), and Martin Kove (John Kreese)! Find out how long it took them to get ready for the evening, who the best IRL fighters in the cast are, and what guest stars they'd love to see on the show!