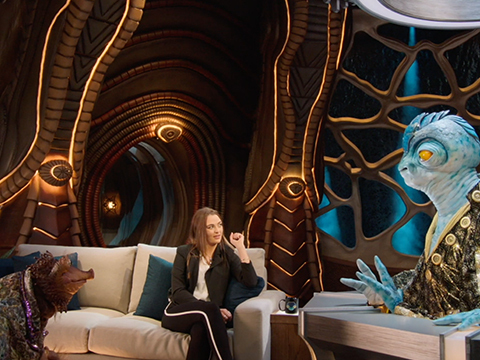 Talking Memes, Social Media, & Dating with the Aliens of Earth To Ned

Once upon a time, an alien named Ned was sent to Earth with the mission to conquer the human race. But once he stepped foot on our planet, he became completely mesmerized by pop culture and celebrities, so instead of conquering us, he started his own talk show! It was then only a matter of time before the ultimate authority on all things pop culture, Young Hollywood, found their way to Ned's underground talk show lair! We drop in on Jim Henson Studios to visit the incredible set of the Disney+ show, and do not adjust your TV screens -- that is not CGI but honest-to-goodness puppets and animatronics! We meet Ned himself, along with his co-host Cornelius and the ship's A.I. BETI, and dish on our mutually favorite topic: pop culture! We get the alien visitor's thoughts on such uniquely human innovations like social media, memes, dating apps, and eyebrows!