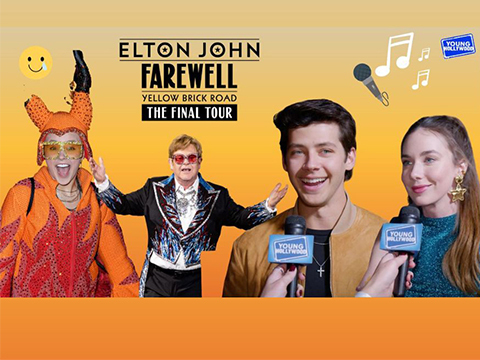 Sir Elton John's legendary performance at Dodger Stadium in 1975 has become so iconic that it was even a major part of his biopic 'Rocketman'! Now, almost 50 years later, the singer is revisiting that magical moment with a stop at the same venue on his Goodbye Yellow Brick Road farewell tour, and Young Hollywood was there to catch up with just a few famous faces in attendance on the yellow brick carpet to show their support! JoJo Siwa shows off her epic Elton John cosplay and reveals the 5 people she would invite over for Thanksgiving; "High School Musical: The Musical - The Series" cutie Matt Cornett scoops us on his Disney Friendsgiving and reveals the one song he'd love to duet with Elton John on; and "National Treasure: Edge of History" star Lyndon Smith reveals her favorite Elton John jams! "Elton John Live: Farewell From Dodger Stadium" is now streaming on Disney+!