Why You Shouldn’t Be Ignoring “Ghosts”! 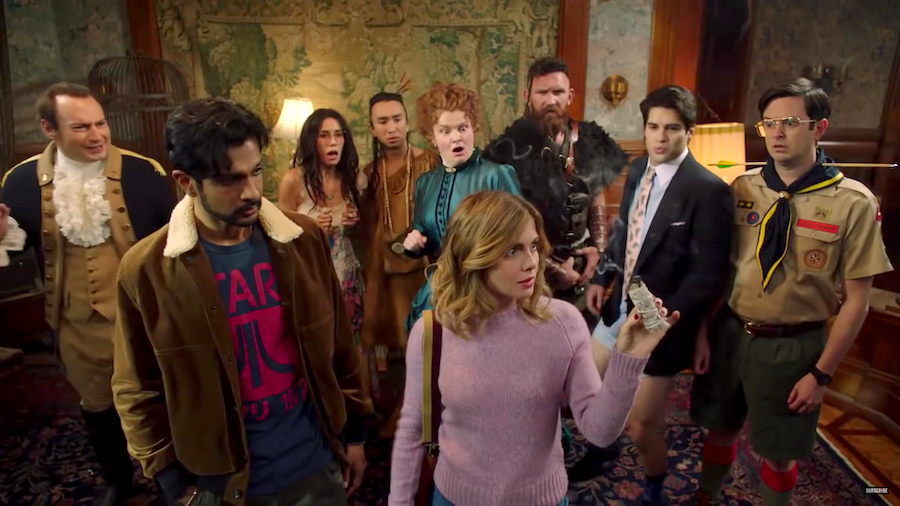 At this point, American reboots of U.K. comedy series are practically a dime a dozen, but it’s rare that any of these reboots not only capture the spirit (pun intended?) of the original but also translate perfectly to U.S. audiences, like, say, “The Office”. One new show that definitely deserves to be in the same playing field is CBS’s “Ghosts”!

Based on the (fairly new) U.K. sitcom of the same name, the basic premise of “Ghosts” is, a city woman named Samantha inherits an old country estate from a distant relative and moves in with her husband, Jay, only to realize the place is swarming with the spirits of the undead! Yes, it sounds like the plot to the next Blumhouse horror movie, but this is actually a comedy!

After a bump on the head, Samantha suddenly and jarringly gains the ability to see and communicate with the ragtag group of 8 ghosts who also call her new house home after meeting their own ends in or on the property over the centuries, including:

- Thorfinn, the oldest of the ghosts, a boisterous Viking who was abandoned by his crew on the property and then struck by lightening.

- Sasappis, a Lenape Native American who is so done with everyone.

- Isaac, a stuffy Revolutionary War veteran (of indeterminate rank) who died of dysentery and has a really big grudge against Alexander Hamilton.

- Hetty, a snooty Victorian matriarch who actually lived on and owned the estate and is an ancestor of Samantha’s.

- Alberta, a Roaring ‘20s-era diva who is convinced that she was dramatically murdered but likely just had a heart attack.

- Flower, a ditzy hippie chick who was mauled by a bear after trying to befriend it.

- Pete, a chipper ‘80s-era Girl Scouts troop leader who still carries around the weapon of his demise on her person: a rogue arrow through the neck.

- Trevor, the newbie of the group, a Wall Street douche who died with his pants down (literally) sometime in the late-‘90s or early-Y2K (he knows what the internet is but not Facebook).

There is also a group of “zombies” that hang out in the basement who even the main ghosts are creeped out by, plus there have been a couple glimpses and hints of a 9th ghost on the property, a ‘50s-era dude who appears to have been decapitated…

The series stars someone who is no stranger to paranormal quirkiness – Rose McIver, whose previous long-running series “iZombie” saw her starring as a sentient brain-eater. Now, she is dealing with a different sort of dead folk, and she’s perfectly charming in the lead role of Samantha, as she struggles to balance renovating the property with the constant demands of ghosts who have never been able to communicate with a “living” before. She also has to deal with being a go-between for the ghosts and her skeptical husband, who obviously can’t see or hear the ghosts and also took a great deal of convincing that Samantha wasn’t crazy.

Not only is the show hilarious but it also has a ton of heart. In an earlier episode, Thorfinn finally gets the honorable Viking funeral he was denied hundreds of years ago, and in the most recent episode, Samantha invites Pete’s wife to the estate so that he can see her one last time. Every character is fleshed out (pun NOT intended) and has their own personality, and you totally become invested in their pre- and post-death lives beyond the cheeky ghost gags. I can’t wait to learn more about them in future episodes (and yes, I am totally shipping Thorfinn and Flower).

It has not yet been announced if the series will get a second season, but that’s where YOU come in. There is a noticeable shortage of lighthearted, non-cynical comedies out there lately, and even though this series deals with some darker subjects, it does so in a very respectful and humorous manner, and I for one think more people need to know about it and watch!

New episodes air every Thursday, and you can stream all them on Paramount+, so DON’T DELAY, get on the “Ghosts” train asap!!!