Why You Should Binge-Watch "Gilmore Girls" on Netflix This Weekend 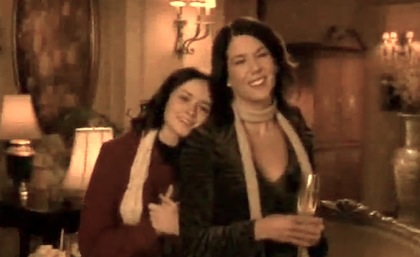 Just in case some of you didn’t know, "Gilmore Girls" is now available on Netflix. Yes, you can stream all 7 glorious seasons as of the beginning of October. But why is this such a big deal? Is "Gilmore Girls" even still worth watching or, if you’re like me, watching again? The answer is YES.

The hilarious duo, Lauren Graham ("Parenthood") and Alexis Bledel (The Sisterhood of the Traveling Pants) will once again be teaching life lessons and making us feel like we need to be so much more clever with our words.

Now, for those of you who don’t understand the hype, like my mother who gets headaches when she watches the show, I’ll break it down in a simple list for you. I know that the dialogue in the show can be a bit hard to keep up with (precisely why my mom isn’t too big of a fan of the show), but keeping note of their witty banter will make you appreciate the effort and humor behind the script. Some like the quippy dialogue, while others aren’t as drawn to it, but the series presents life lessons that still are and will always be relevant to the real world.

So without further ado, let me get to the reasons why "Gilmore Girls" is one of the best shows to come out of the WB. Whoa, WB. Throwback. Sorry, anyways…

Family dynamic. "Gilmore Girls" is one of the first few television shows that has jumped into the life of a non-typical family. Lorelei, a single mother, and her daughter, Rory, serve as a very complicated and envious mother-daughter/best friend dynamic. The show is able to explore the relationships between Lorelei and Rory, as well as their relationship to Rory’s grandparents and the more extended family of Stars Hollow.

Hilarious. This show is beyond funny. The chemistry between the entire cast implements a very natural, real-life, and whimsical back-and-forth between the characters. Although it is somewhat exhausting to keep up with, the dialogue and the situations that occurred in the show were always hilarious. Years later, I’m still laughing at the plot and the characters reactions.

Crazy small town. In 7 seasons, "Gilmore Girls" was able to showcase the very eccentric bunch that made up their small town of Stars Hollow. Each town member, with their own quirky personality, was part of the Gilmore family in one way or another. What we can take away from this is, no matter how weird or crazy or irksome our friends and family are, we love them for who they are. Awww. Also, it doesn’t matter if you’re blood-related or not. Family is more than blood.

Rory goes to… Yale? One important aspect of the show revolved around Rory’s journey getting into college, going to college, and post-grad from college. Many of the small episodic plotlines involved high school and college-related issues that many teenagers and young adults can relate to and maybe even teach them about. Yeah, Rory went to an Ivy league school, but we can all dream, right?

Boys. This list would not be complete without a shout-out to the men of the "Gilmore Girls" series. Both main characters had their share of relationships, and some of the boys on the show led to very successful acting careers. Some of my favorites are Chad Michael Murray, Jared Padalecki, Milo Ventimiglia, and Matt Czuchry.

This scene always tears my heart into two:

Decisions. The series actually provides very true-to-life scenarios that many people struggle with in their own lives. For instance, Lorelei and her decision to start her own business venture and which college Rory chooses are among the few. One, in particular, that hit home for me was Rory and her struggles of college post-grad.

"Gilmore Girls" is a witty, smart, emotional, and definitely timeless series that, even after 7 years, still feels relevant. So thank you, Netflix, for giving us a show that will make me feel old and very nostalgic especially when I hear the theme song...