Why You Should Be Watching The Spike TV Miniseries “TUT”! 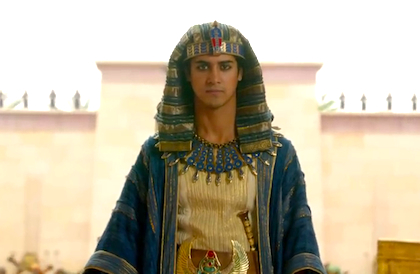 It seems odd, but it's true -- there has never really been a dramatization on film or TV of the life of King Tut, which is surprising considering how iconic he is and how much we have learned about him since his tomb was famously discovered in 1922. But all that has changed now, thanks to Spike TV! The network's miniseries “TUT” stars Avan Jogia in the titular role, along with Academy Award Winner Sir Ben Kingsley. King Tut was one of the most famous pharaohs of ancient Egypt; he was around eight years old when he came into power and ruled for about ten years before an accident took his life (and became the source of many conspiracy theories over the centuries).

If you haven’t tuned in to this lavish TV production yet, here are some reasons why you should!

The miniseries was shot on location in Morocco, and it totally captures the kinds of elements the Ancient Egyptians would have experienced, such as heat and the type of environment they lived in depending on their status. The interactions of people in trade and the desert landscapes completely envoke the time period.

This show has put in an incredible amount of detail when it comes to costume design. The clothing really takes you to another world where the actors fully embody the people they portray. Italian costume designer Carlo Poggioli was the costume designer on “TUT”, and he has certainly outdone himself In this behind the scenes clip from Spike, we can see that he definitely did his research on what fabrics should be used and what colors would bring this time period to life. The use of linen and hand-pleated linen is something you don’t see on television everyday, and it's absolutely breathtaking. When Avan Jogia visited the YH Studio, he let our own Nikki Novak try on a piece of jewelry that he wore while filming! Check out that interview below!

As someone who has grown up watching Avan, I must say that this performance is something we have never seen from him before. He really embodies the iconic Ancient Egyptian pharaoh. He commands your attention on screen and transports you to another world. Not to mention, he has fantastic chemistry with Sir Ben Kingsley! I would love to see them do more projects together. The series also stars Kylie Bunbury, who has appeared alongside Jogia in the ABC Family show “Twisted”. Kylie plays Suhad, who falls in love with King Tut. In the next few installments, we are going to see how she can be a threat to the queen, which is bound to be juicy!

This miniseries is unmatched on television right now. It has history, suspense, romance, action, and drama -- all the elements to keep an audiences glued to their TVs. If you want to catch up on the episodes you can watch them here! The show will air over three nights, spanning a total of six hours, which started on July 19 and continues tonight, so be sure to tune in!