Why is "Sherlock" So Great? It's More Than Elementary! 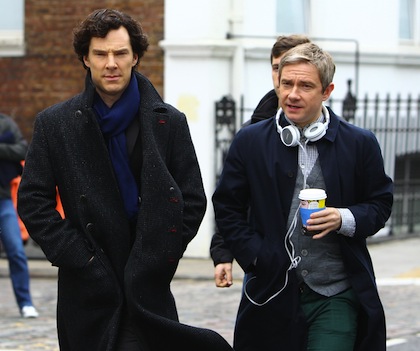 2014 hasn’t been around for very long indeed, but it has already given the world a very special gift: Season 3 of the BBC’s “Sherlock”. But the TV lords giveth and the TV lords taketh away, and pretty soon we’ll have to bid farewell once again to the master detective and his affable companion. No, the show hasn’t been cancelled, it’s just that this particular British series is a bit more short and to the point than others out there, as there are only three episodes per season. However, each episode does last close to two hours, so you do get a good amount of story per season.

But enough of this technical jargon. Let me explain to you why I’m sad to say goodbye one more time to what I consider to be one of the greatest television series ever created. Actually, come to think about it, I think I just explained why I’m sad quite nicely with that last sentence.

Yes, as of right now, “Sherlock” is easily on my short list of Greatest Television Shows Ever Made. It is only trumped by the likes of “The Wire”, “Homicide: Life on the Street”, and “Cowboy Bebop”. So, why is “Sherlock” such a great show? Well... it just is! Okay, okay, I’ll try to go into a little more detail than that.

Years ago, when I first heard that there was a modern-day adaptation of Sherlock Holmes floating around, I was less than enthused. I think I was still in shock after having seen a modern-day adaptation of Murder on the Orient Express, and so I was not quite in the mood to see another one of my favorite fictional characters ruined. Eventually, upon the recommendation of a few of my friends, I hunkered down and gave the show a watch. It goes without saying that I was not disappointed.

One of the major keys to the show's success is the relationship between Holmes and his faithful companion John Watson. In the books, they sort of fall together by happenstance, and the same is true with the show. However, the major change that this series makes with their friendship/partnership is the overall importance of it. In the books, Watson was just sort of a clueless doctor who was constantly being embarrassed by Holmes’s superior intellect. In the show, the friendship between the two is very vital because each views the other as their connection back to humanity. Watson served in Afghanistan and was wounded; he is sent back home in an absolute state of depression because a part of him misses the fight, and now that he is home, he wonders just what else he has to offer society. His adventures with Sherlock are, in fact, just what the doctor ordered, and Watson’s involvement in them renews his sense of purpose.

And then we have the master detective himself: Sherlock Holmes. Sherlock needs Watson because Watson has insight into something that Holmes has a very hard time grasping -- human feelings. To be more specific, it’s not that Holmes doesn’t understand emotions, it’s just that he doesn’t see any worth in them. Holmes is cold and analytical, and while that does allow him to think outside the box more than others, it also hinders him because he fails to recognize the plight of those he is helping and in turn makes him less of a human being, even though he is intellectually superior to most people. Watson’s presence during Sherlock’s investigations helps to reign him in and allows for him to experience a different and more compassionate viewpoint on the matters at hand.

It goes without saying that I’m a huge fan of our two leads. Martin Freeman is excellent in the role of John Watson and, much like many of the show’s storylines, he is able balance the humor and horror of the show almost effortlessly. And then there is Benedict Cumberbatch. I don’t think this show would’ve worked without him. That is not to say that he is solely responsible for the show’s success, but, realistically, a good deal of that success is in fact owed to him. He is a humorless man who can make you laugh more than the funniest person working in show business today. He doesn’t believe in sentimentality or kindness, and yet he can bring tears of sadness and joy to your eyes with just a mere gesture or turn of phrase. And, damn, is he one snappy dresser!

As I said before, this show can go from being absolutely hilarious to being incredibly poignant and dark in a near instant. In the first two seasons, none of the deaths are taken lightly and each come with their own weight. This, in turn, makes the mysteries that surround them all the more engrossing because there is a true desire for justice to be done. The complexity of the mysteries are ingenious and only serve to strengthen the fabric of the overall story as opposed to be merely existing for entertainments' sake. Our two leads go on a journey in each episode, and their growth as characters is what truly drives the stories as opposed the crimes they’re solving. And yet character drama and the excitement of the chase are so tightly woven together that neither element seems lacking. Mark Gatiss and Steven Moffat have worked miracles with their writing and there are not enough complimentary words in the English language to thank them enough for doing so. So, how has the 3rd Season been so far? Well... it’s been kind of different.

The reputation of the previous seasons has spread quite nicely, and as such a wonderful fanbase has formed that is attracting newcomers everyday. I think they are aiming to really impress the newbies with this season, as some of the aforementioned gravitas has taken a backseat to the humor and lighthearted aspects of "Sherlock". It can certainly be said that Season 3 is the busiest season in terms of visual effects and editing, as the show is really striving for the kind of hyperkinetic pace that, in lesser shows, tends to breed excitement even though there is not much going on. And that is where Sherlock is different from those shows. The richness of characters, the timing of the comedy and the cleverness of the mysteries allows for the show to still work wonders, even if it is on slightly different terms this time around. The third and final episode will debut in a couple of days, and it promises a return to the slightly more somber and dark tone of the show that we are used to. So far, the return of “Sherlock” has been a positive experience for myself and for many of the people that I know. I don’t know how many more seasons are in store for us, but I for one am thankful for what we’ve been given. And that is a true work of art in every sense of the word.